First signs point the way to Aporia: Beyond the Valley

Life is full of peaks and valleys, and while the latter is usually a negative thing, the opposite will be true later this year with the release of Investigate North's Myst-style 3D adventure, Aporia: Beyond the Valley.

Aporia casts players in the first-person role of an amnesiac who awakens from sleep after hundreds of years in the "mystical world of Ez’rat Qin – once a mighty civilisation, now a crumbled ruin." With no understanding of either your own past or that of the valley of "dark beauty" around you, you must "embark on a quest to find out what happened in this world, and to discover who you are," avoiding traps and solving "brain twisting puzzles" along the way.

Described as an "experimental, story driven, non-linear puzzle game," Aporia tells its tale of "humanity, technology and civilization" entirely without words, leaving players to draw their own conclusions from the environmental clues uncovered. Brought to life by the CryEngine, the valley promises to be filled with "strange nature, ancient technology, and haunted by a spirit roaming the fog-covered forest." You are free to choose your own way forward, utilizing as-yet-unrevealed "new, interesting puzzle mechanics" to overcome obstacles in your path.

Desktop explorers don't have too much longer to wait, as Aporia: Beyond The Valley is currently on schedule for completion on PC sometime before the end of the year. 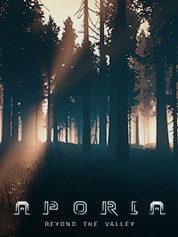