Usually the only dinosaurs involved in adventure games are the old PCs playing them, but there will soon be a not-so-terrible lizard starring in her own Cretaceous quest. Enter Zid & Zniw Chronicles: Zniw Adventure, an indie point-and-click title currently in development by Polish couple Lukasz “Crash” Mikolajczyk and Karolina “Twarda” Twardosz.

Zniw Adventure serves as a standalone prequel to Twarda’s planned comic book Zid, Zniw, and Others, telling the story of a young female dinosaur named Zniw who finds herself far away from her home city. In order to return, she must pass through the prehistoric land of Polisemia, a “savage” and dangerous place. It will be the player’s job to guide Zniw back home to her family, while avoiding threats and interacting with various characters encountered along the way, including other dinosaurs, birds, and snakes.

The game is played from a 2D third-person perspective and features a whimsical cartoon art style. The kinds of puzzles players can expect to see include inventory obstacles, combining items in order to create a backpack (which serves as the game’s inventory), and logic challenges in which you must collaborate with another character. There’s also a hunger-management system, where Zniw must find an occasional snack before a timer runs out, or risk passing out from lack of food. While the implications of falling unconscious in a dangerous land suggest some intriguing consequences, the developers indicate that the game will be family-friendly, avoiding such things as violence and blood.

Primarily mouse-driven, the game features a “verb coin” interaction system. While solving puzzles will be required to progress, picking up hidden pebbles scattered around the environment unlocks extra features, such as concept art and arcade-style minigames, which are playable with either keyboard or optional gamepad. An encyclopedia feature reveals information about game lore, characters, and locations, and includes “educational” information about various species encountered throughout the game.

Zid & Zniw Chronicles: Zniw Adventure is tentatively scheduled for PC release in mid-to-late 2016, though as production is being done in the developers’ spare time, this date is subject to change. To help tide gamers over, a playabe demo of the game is available for download now, starting right at the beginning of Zniw’s journey. If you like what you see of the early sampler, you can also vote for the game on Steam Greenlight. 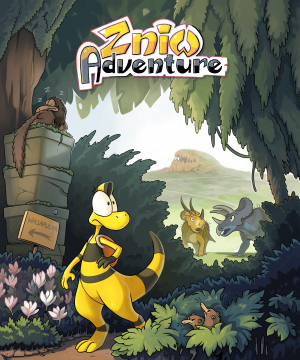