No matter how many times he's beaten up, gunned down, or harassed by verbal zingers, you just can't keep Tex Murphy down. After resurrecting his career with last year's The Tesla Effect, now there's more of everyone's favourite futuristic gumshoe on the horizon in Poisoned Pawn, a fan-made, upgraded remake of Overseer.

First released back in 1998, Overseer itself was something of an enhanced remake of Access Software's Mean Streets. Using the same 3D interface with live-action film footage as Under a Killing Moon and The Pandora Directive, Overseer was framed as a conversation with Tex's would-be girlfriend Chelsee as he recounts his first case. A mystery involving the death of his soon-to-be-ex-father-in-law soon explodes into a vast conspiracy extending all the way to the top levels of government, which helps to explain how the fresh-faced eager young detective who played strictly by-the-book became a cynical down-on-his-luck PI who never encountered a rule he wasn't willing to break. The game also ended on a whopper of a cliffhanger that left fans hanging for well over a decade.

Poisoned Pawn aims not only to eliminate any remaining technical issues of the original version by rebuilding it from the ground up in Unity 5, but also to "spruce up" the game. The developers claim that "along with all the original cinematics, puzzles, conversations, story and settings, Poisoned Pawn will feature new and expanded settings, brand new puzzles and even more immersive gameplay."

The remake is being created by a group of devoted fans of the franchise, but it has the blessing of series creator Chris Jones and Big Finish Games, so there are no sticky licensing issues that would hinder its development. That's a good thing, because production has been underway for quite some time, with a final release on track for sometime in 2016.

To learn more about Poisoned Pawn, drop by the official website for additional details. 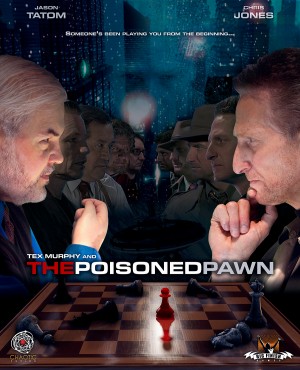 A fan-made new installment of the Tex Murphy series.

See all games in the Tex Murphy series
Advertisement