Dealing with grief and guilt can be difficult at the best of times, but all the more so when forced to confront the nightmarish physical manifestations of those feelings. Such is the premise that awaits players in Charlotte's Dream, a retro indie adventure currently seeking funding through Kickstarter.

Charlotte's Dream casts players in the titular role of a young girl who "barely escapes with her life after a tragic car accident. Haunted by guilt over the death of her brother, she becomes trapped in a dangerous and surreal dream world." In order to escape, Charlotte must not only make peace with her "darker self" but also "face her deepest fears and uncover the truth that she has denied herself." Yet the mystery runs even deeper than that, as "the game takes a darker turn when Charlotte explores a far more intriguing question: Could it be that her brother is still alive?"

Although described by indie Dutch developer Robert Guiscard as a "love letter to the classic point and click adventure genre", Charlotte's Dream isn't entirely traditional. Along with the usual genre conventions, the game promises to include a "time freeze mechanic" and a "leveling system, with a literal skill tree", in which players earn points for "finding clues, items and solving puzzles" that can be used to buy new skills needed to solve even more puzzles. There will also be a crafting system that rewards exploration with randomly scattered materials. In conjunction with optional recipes, this will "allow the player to craft so-called 'relics', which enable the player to approach puzzles from a whole new angle." In keeping with the freedom to approach obstacles in different ways, there will be multiple puzzle solutions and different endings.

If it looks from the screenshots that Charlotte's Dream would have been right at home 20 years ago, that's because Guiscard actually first designed the game back then (when he was only 12) for the Amiga. Now in development exclusively for PC, the game is being rebuilt from the ground up with "touched up" graphics that stay true to the original colour palette and pixel art style. Controls have also been upgraded to current-day point-and-click standards.

In order to bring this decades-in-the-making adventure to fruition by the end of 2015, Guiscard is seeking €20,000 by August 21st through Kickstarter, with a €10 minimum pledge needed to secure a downloadable copy of the game upon completion. To learn more about Charlotte's Dream and support the campaign, visit the Kickstarter campaign and official website for additional details. 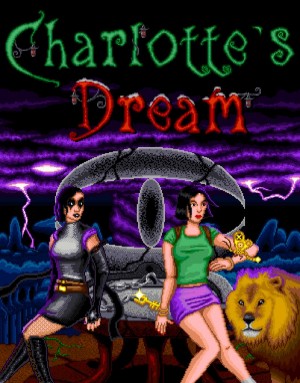