Horror fans will want to dare a peek through hand-covered eyes at a new Kickstarter campaign for Scorn: Episode One, an open-ended survival horror being developed exclusively for PC.

Serbian development studio Ebb Software describe Scorn as a first-person horror adventure in a “nightmarish universe of odd forms and somber tapestry” that emphasizes “exploration and interaction with the game world”. The non-linear, maze-like setting is heavy on isolation and atmosphere, with lots of strange architecture and unknown artifacts to investigate and examine. Traditional narrative takes a back seat, as players are encouraged to “give their own interpretation of the events, themes and their role in this universe.”

Scorn’s grim, dark sci-fi setting immediately invites comparisons to action-heavy shooters, but the developers are quick to dispel such notions, claiming: “Scorn is a mixture of exploration, puzzle solving and gunplay. Gunplay is very defined and most of the time players will use their weapons as a last resort.” Though the Kickstarter campaign does mention Resident Evil-style buzz words like “ammo management” and “cover”, Scorn also promises to be comparable to other unique gaming experiences like Journey and Ico.

The development cycle will be a lengthy one of two years, with the first of two planned episodes expected to launch in December 2016 if the developers are able to raise an ambitious €200,000 through Kickstarter by December 23rd. Interested players can secure a digital copy of the game starting at €15. For a full breakdown of the various pledge tiers, as well as additional information about the game (including possible Oculus Rift support), visit Scorn’s Kickstarter campaign. 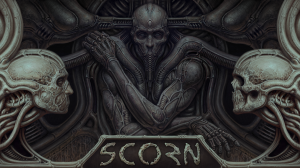