Being dead isn't usually the preferred condition, but being undead has proven to be awfully enjoyable in the adventure genre so far. Indie Australian developers Intuit by Design are looking to continue that tradition with the upcoming Vincent the Vampire, currently seeking funding through Kickstarter.

The setting for Vincent the Vampire is anything but ideal, at least for the living. The populace of this "ancient, decrepit city" include the likes of "Vampires, Werewolves and Cyborgs, but other inhabitants include cultists, a monk reincarnated as a pot plant, and a psychotic '80s super computer, lawyers, ghosts, thieves, vacationing demons, the Underlord, Death and many more." Vincent is a lowly human photocopy technician who suddenly sees the light of his meaningless existence – just in time to be brutally murdered and awaken the next day to find he's a vampire.

It turns out that Vincent's world is in the throes of an ancient war that only he can save it from – not because of his newfound powers, but because "nobody else can be bothered." His supernatural abilities will come in handy, however, as throughout his adventure he will "learn to control his new vampire powers such as hypnotism, the ability to talk to plants and transmogrification." This helps provide the game with multiple puzzle solutions, and along the way there will be optional side quests for each of the secondary characters.

Featuring a distinctive hand-drawn art style and inspired by the LucasArts classics, Vincent the Vampire promises to be darker than many adventures, tackling themes like "murder, war, regret and depression", but also maintain a "fun sense of humour in the form of a war ended by sentient 3D Printers... a murderous chicken hitman... and much more."

The game is currently on target for completion by October 2015 on PC, Mac, and Linux, but in order to do so the developers need to raise $30,000 AUD by December 15th on Kickstarter. An early bird tier offers backers a DRM-free copy of the game for only $10 for a limited time, after which the price jumps to $15. To learn more about the game, head on over to the Kickstarter page for full details. 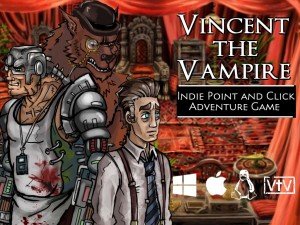