Developer Sunlight Games is bringing to light a remake of one of Sierra On-Line’s lesser-known titles, Gold Rush!. For those unfamiliar, Gold Rush! was originally released back in 1988, towards the end of Sierra’s own metaphorical gold rush of games based on their AGI engine (think King’s Quest I – III).

Gold Rush! put players in the persona of mild-mannered Brooklynite Jerrod Wilson, circa 1848, who receives a letter from his long-lost brother imploring him to join him in Sacramento and confirming rumors of the eponymous California gold rush. Being one of the very few Sierra adventures not ending in “Quest”, Gold Rush! was a bit of a unconventional game at the time, essentially being Sierra’s take on Oregon Trail. It featured a branching campaign that allowed players a choice of three routes to California (overland pioneer-style, sailing to Central America and crossing the Isthmus of Panama, or sailing around Cape Horn), with each route consisting of its own set of unique puzzles and challenges. For their remake, Sunlight has promised the expected enhancements, including high-resolution (pre-rendered) graphics and voiceovers. In keeping with the game’s central conceit, they’ve also promised a choice of three different input options: parser, point-and-click, and “modern” point-and-click (though no details on the distinction between the latter two have been offered). Although the developers are committed to preserving the story and branching paths of the original, there is no word yet on whether they also plan to maintain the dead-ends found in its predecessor.

Full details about the Gold Rush! remake can be found on the official website. The game is slated for a PC release in late 2014, with Mac and mobile versions (iOS and Android) to follow. In the meantime, for those who can’t quite wait that long to die of cholera, Sunlight is also planning to re-release a port of the original version for PC and iOS sometime this spring. 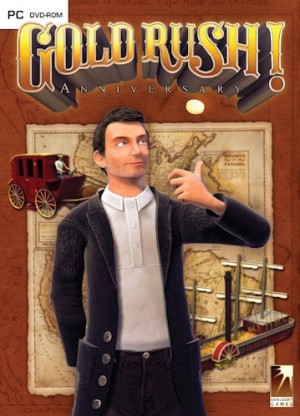