Traditionally, adventure games take us to exotic locations, let us act out unfamiliar fantasies, or place us right in the middle of alien worlds and distant times. But can intriguing tales be found in our everyday experiences? Does the life of a geek offer up potential for a story gamers will love? The creative minds behind Geek’s Lair: The Crazy Scientist, Osolin brothers Maj and Žiga, think so.

Geek’s Lair is the story of Peter Frog, average Joe, science student and run-of-the-mill geek. Peter’s ordinary life takes a left turn when he stumbles upon information about a mysterious virus. During his investigation into the matter, Peter ends up on the lam while pursued by authorities for a crime he did not commit. Could an ordinary guy be the one to save the world?

Rendered in 3D with a cel-shaded art style, the game is intended to be a humorous take on the classic point-and-click adventure formula. The emphasis is on realistic situations, but the brothers are not averse to lampooning pop culture icons: “Conversations resemble the ones from popular movies and series, sometimes in a different context bringing them to new dimensions.”

The developers have been working on this project for the past 10 months, and have recently launched an Indiegogo campaign to complete it. Interested gamers can reserve a copy of the game for Android or iOS for 15€ (10€ if you take advantage of the Early Bird Special). While the game is not planned for widespread release on desktop PCs, there are special contribution tiers to pick up a limited distribution PC version of the game. The campaign will run until September 27, 2013, and features flexible funding, meaning the developers will receive all pledges regardless of the goal being met.

Geek’s Lair is slated for release later this year. To learn more about the game and contribute to the crowdfunding campaign, visit the Indiegogo page for full details. 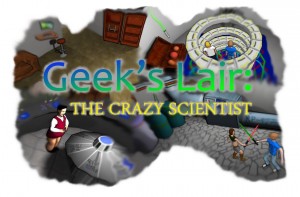