Update: Taxi Journey NO LONGER picking up customers on Kickstarter

Note: Since time of original writing, the Taxi Driver Kickstarter campaign has been canceled by its creators, and will be re-launched this September.


Lexis Numérique has always been an experimental, publisher-worrying developer, so it's no surprise that the indie French studio's latest adventure, Taxi Journey is currently seeking crowdfunding through Kickstarter.

The latest game from the creator of such diverse titles as MISSING: Since January (In Memoriam), The Experiment, Red Johnson's Chronicles and Alt-Minds pairs together a large, quiet, "rather odd taxi driver" named Gino, who's so poor he "can only afford a car without an engine and without a passenger seat so he has to carry his clients on his back and pedal instead of drive" and Zoe, a "strange little girl with mysterious powers, who takes him to strange and distant lands where they meet a host of loveable and funny characters as well as some rather disturbing ones who will do anything to stop them."

Inspired by the likes of Limbo, Braid, and Machinarium, and completely drawn in pencil, Taxi Journey promises to be a "cross between an adventure game and a platformer set in a universe that combines charm, humor and mystery." While overcoming obstacles based on the laws of physics and solving puzzles along the way, the unique abilities of each character must be used cooperatively in order to succeed, such as having Zoe "throw magic projectiles or put up her protective umbrella" with Gino behind the wheel. Despite the platforming elements, however, the developers stress that they are "keen to focus on the story and the 'adventure' dimension' as you become "moved by Gino and Zoe’s budding friendship and feel genuinely concerned about their plight."

With enough public support, Taxi Journey could be completed for PC and Mac (other platforms possible if fundraising goals are exceeded) as early as September 2014. To do so, it will need to raise $230,000 by July 26th through Kickstarter. A minimum "early bird" pledge of $20 will grant backers a free downloadable version of the game, as well as private beta access. A host of other digital and physical rewards are available at higher tiers.

To contribute to the campaign, watch the pitch video, or simply to learn more about Taxi Journey, visit the Kickstarter page for full details. 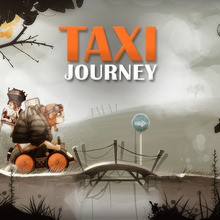