The devil may be in the details, but it seems he also found his way into The Detail, a "grim" episodic mystery adventure currently in production for release next year.

The Detail casts players in the dual roles of a "hard-nosed detective named Reggie Moore who has grown disillusioned with the bureaucratic system of justice, and a former police informant named Joseph Miller who is being dragged back into the life in order to clear the debt that looms over his past." A series of crimes has engulfed the "dark and embittered city" in which they live, and players must balance "both sides of the thin line called justice, in a world filled with violence, drugs, human trafficking and corruption."

The game's first teaser shows off the gritty noir theme "inspired by TV crime drama series like The Wire, an art style that borrows heavily from graphic novels like The Watchmen," and the "deep, story-driven gameplay similar to Telltale Games' The Walking Dead, where your choices carry consequences that alter the course of the narrative."

Created by indie Finnish developer Rival Games, The Detail is a planned episodic adventure that will debut in the first quarter of 2014 for Windows, Mac and Linux (with tablets to follow later), with all subsequent episodes to be released before year end. There's no need to wait to have a closer look, however, as a playable demo is already available from the official website. 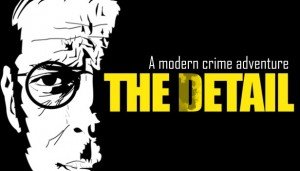