The Coral Cave to be awash in hand-painted watercolors

After being teased with some stylish hand-painted watercolor screenshots of The Coral Cave, adventure fans will want to keep a close eye on Atelier Sentô's surreal Okinawa island-based title until it's released late next year.

Set on a remote island in the Okinawa archipelego, The Coral Cave tells the story of a young girl named Mizuka. After experiencing a strange dream one night, she wakes up to find "a terrible danger is threatening her village. Mizuka must explore the surroundings and enter a mysterious spirit world in order to save her island."

Created by French comic artists Cécile Brun and Olivier Pichard, The Coral Cave will be "entirely handmade in watercolors and will feature lots of animations, characters and backgrounds." As seen in early screenshots, the developers' fondness for Hayao Miyazaki's films is clearly evident, but the design was directly inspired by their personal travels in Okinawa. This includes the closed-eye character art for Mizuka, as the artists "loved the faces" of some local children they met in the area.

Unfortunately, we're going to have to wait a while to experience the full game, as given the small development team working on it, The Coral Cave likely won't be completed until the end of 2014. In the meantime, you can view keep an eye on the game's progress at the developer's website. 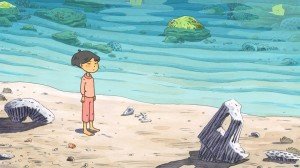