Acclaimed indie developer ClickShake Games is now offering adventure fans A Small Favor for a small favor. The first part of the deal is a new commercial adventure based on their popular browser-based freeware series, while the second is a request for crowdfunding to help finance it.

A Small Favor casts players in the role of an alien assassin who works as a "Favor Collector", an "armed mercenary willing to do what the rest of society can't and operating outside of the ever watchful gaze of the Galactic Ministry of Regulation. Blackmail, theft, assassination - there is no deed too illegal." Employed by a particularly notorious gangster, the deeply indebted anti-hero faces a lifetime of favor collecting, but "during a routine collection assignment he stumbles upon a downed space craft. Inside he finds a body with a high level ID badge and one small favor that, if completed, could wipe his debt clean and give him the new life he craves. But as he soon finds out, a small favor can quickly become a big one."

Beginning life as a pair of online Flash adventures, the current iteration of A Small Favor represents a "reboot" of the series that promises "an expanded storyline, improved artwork and hours of new gameplay." The new version will be a 2D side-scrolling sci-fi adventure that involves collecting favors in various ways: "sometimes it will be as easy as finding a special item or fixing a situation, other times it will involve an assassination, simply wiping out the problem altogether." The protagonist carries a laser gun that remains a permanent part of his inventory to help solve puzzles, but there will be no reflex-based shooting sequences to contend with.

In order to complete the game for PC and Mac by October, ClickShake is seeking $30,000 by May 15th through Kickstarter. Early contributors can pick up a DRM-free downloadable version of the game for only $6 (price jumps to $10 when the offer expires), along with backer forum access and your name in the credits, while upper tier rewards include the likes of a downloadable copy of the developer's first commercial release, The Ballads of Reemus: When the Bed Bites, plus a disc verison of A Small Favor, T-shirts, and various opportunities to be represented in the game itself.

To learn more about A Small Favor and to contribute to the fundraising campaign, visit the Kickstarter page for complete details. 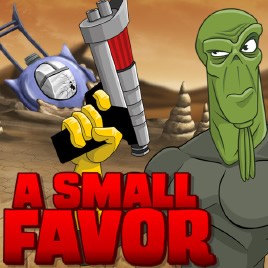