Normally the words "Iceberg, dead ahead!" represent a harbinger of doom, but in this case it's a promise of plenty of adventuring goodness, as Iceberg Interactive has just announced an agreement to publish not one but two Lost Crown sequels from Jonathan Boakes.

First up will be The Last Crown: Haunting of Hallowed Isle, a direct continuation of Darkling Room's popular 2008 supernatural thriller. Once again set on England's windswept coast and presented in black-and-white with accents of colour, The Last Crown sees Nigel Danvers and Lucy Reubans return for a new adventure with a "sea-faring queasy feel" as they "attempt to navigate a fishing boat out to Hallowed Isle."

A "moody, melancholy place; haunted by those who lived, worked and died there", Hallowed Isle "hides its secrets well, buried beneath centuries of bizarre history. Nigel and Lucy will need to use ALL of their new found ghost-hunting skills to unravel the mystery of who, or what, haunts the small, pine ridged island, four miles out at sea." Helping them in their quest is a new 'GhostGadget' prototype, for which players will need to find new parts in order to make the "most effective and powerful ghost-hunting device ever."

Although entitled The Last Crown, this will only be the middle installment of a trilogy, with The First Crown actually coming last.  There is no release target currently scheduled for the series finale, but Haunting of Hallowed Isle is on track for release sometime in 2013.

For more details about The Last Crown, be sure to drop by the official website. 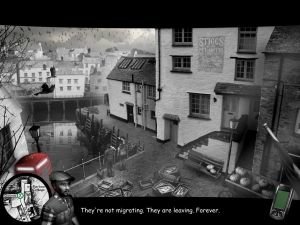 It’s now almost 4 months later and still there is no news about a release date on the website. Pity; I would have liked to go back to Cornwall in the summer after having played the game this spring, but it looks like that will not happen.

Excellent news to get just before Halloween! I can’t wait to get back into that world.

Probably. In any case, I’m whining and this is great news. Finally something concrete about how the games are progressing!

The developer is always the last to know.

Nah, just takes longer to update a website than send out an email.

Nothing about this is in the News section on the The Last Crown website.

This news just made my day!