Anyone looking to wrap their head around a new first-person puzzler will soon be able to do just that in a new indie project underway called Coma: A Mind Adventure.

The creation of  Carlos Coronado and Dani Navarro, previously known for their popular "Warcelona" campaign for Left 4 Dead 2, Coma appropriately casts players in the role of a comatose patient following a serious accident.  Everything you see and experience happens within the man's own mind, but all you know is that "he did something terrible in the past (many years ago) and to get out of the coma he will have to forgive himself by finally accepting who he is and what he did."

In this "mature adult story about life: sadness, violence, remorse, guilt, hope, and what is more important:  self-accomplishment", Coma allows players to control the weather to solve puzzles. It is you who "decides if it’s nightime, daytime, if it rains, if the skies are clear, if there is a terrible fog, and in any one of these states the environment changes radically."  Only by strategically manipulating the "macro climatic state" in each zone will players be able to advance. Environments promise to range from forest to volcano, badlands, and a beach, each of which has its own distinctive style.

As you play, you'll hear the voices of various narrators made up of "relatives, doctors, friends, and others that are in the room where the main character lays in the deep coma, and we will listen to what they say. That will be very important because the mind of the main character will pick up these words and will transform them into environments and puzzles full of metaphors." Control through these free-roaming 3D enviornments will be handled by the standard keyboard/mouse combination, and there are some "action" elements such as jumps and hiding from enemies who can't see well in the fog, but the developers have confirmed that there is no combat required.

As with so many games these days, the developers have launched a fundraising campaign for Coma.  This time it isn't Kickstarter, but Indiegogo, which doesn't require the full target amount to be reached.  Still, the $7,400 goal seems modest enough, with an end date of July 16th.  Pledge rewards range from a free copy of the game to artwork to varying degrees of access to a "viral ARG" during development that will "determine the destiny of the main character in Coma."

The ARG will certainly give people something to do while they wait, as there is currently no firm timeline for Coma.  The developers have stated that it will take at least a year to complete the game, though certainly less than two.  To view a pair of gameplay videos, and learn more about the game and its fundraising options, the Indiegogo page has complete details. 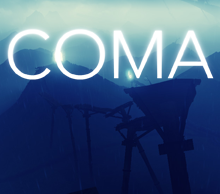 I think this is a very interesting idea but I’m afraid it will not get enough money to get it finished. I’m still pondering wether I will put money in it or not.