The flood of classic adventure developers returning to the genre fold continues today, with word that Mark Crowe and Scott Murphy are teaming up once again for a brand new adventure.

The renowned Two Guys from Andromeda (now going by the unnumbered moniker "Guys from Andromeda") are of course best known as the creators of Space Quest.  It's certainly been a while since they worked together at Sierra, but the website and video announcing their new project declare that "After a brief 25+ year hiatus we (Mark and Scott) have joined forces once again and are tooling-up to bring you a new Space Adventure, or SPACEVENTURE™, if you will."

There are currently no details about the new project available, but the developers are promising the game will incorporate the "same style of comedy, wonder and excellence you expect from a Two Guys adventure." While no fundraising appeal accompanied the recent announcement, it seems likely that one will follow in future, as Crowe and Murphy note that "The way games are made and gotten into a player’s home has changed greatly... We are adapting to the changes, taking advantage of them and charting our own course through space."

For more information about the project, check out the official website. 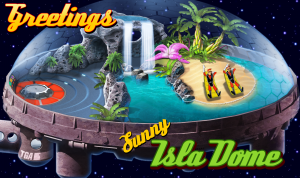 Where do I send my buckazoids?