In the debut installment of a "planned series of comedic, heavy metal influenced, apocalyptic point'n'click adventure games" by two-man developer Walk Thru Walls Studios, a couple of metal-heads crash their car in front of a medical building in the midst of a zombie invasion. Now trapped, they are forced to "use their wits to puzzle their way to freedom. Along the way, they must deal with a cast of characters who range from mildly deranged to completely insane."

As seen in the trailer, there is no shortage of blood and brain-eating mayhem in Metal Dead (whoops, should've warned you sooner!), but it's all done in fun comic style. Although intended to be an ongoing series, the developers are promising a full-fledged adventure right away, with over 40 rooms to explore, 17 unique characters to interact with, a built-in hint system, 13 achievements, and 5-7 hours of gameplay.

For more details about Metal Dead, including links to purchase the game for less than $5, head on over to the official website. 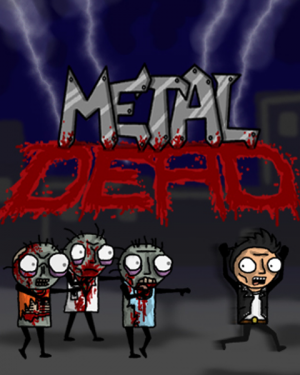 I guess it was inevitable that the current video game zombie obsession would make it to the adventure genre.  And here I thought Zombie DLC for LA Noire would probably be the first.