Doctor Lautrec and the Forgotten Knights remembers to launch

Solving puzzles is hard enough in 2D, but those with a Nintendo 3DS had better be prepared for a whole new puzzling dimension, as Konami today announced that Doctor Lautrec and the Forgotten Knights is now available in both the UK and North America.

The Layton-like puzzler puts players behind the bushy moustache of Doctor Jean-Pierre Lautrec in 19th century France. In search of the hidden treasures of Louis XIV, Lautrec discovers that "this isn't the normal excavation once the presence of Jacques-Marie Vidocq arrives and his goons soon begin to give chase. Armed with his over-zealous assistant, Sophie, an antiquated map and a lot of luck, Doctor Lautrec finds himself in a perilous race in the Parisian underworld, surrounded by bad guys, all of who are on the hunt for the same long lost treasure."

Although not shown in trailers for obvious reasons, the puzzles in the real game promise to make good use of the handheld's unique 3D imagery and get progressively more difficult the farther you get. Challenges will range in style, as some "might require memory recollection, while others will challenge the player's spatial relationships or possibly discerning repetitive objects within a picture."

Doctor Lautrec and the Forgotten Knights is in stores now, retailing at a cost of $29.99 in North America (prices vary in UK).

Doctor Lautrec and the Forgotten Knights  (2011) 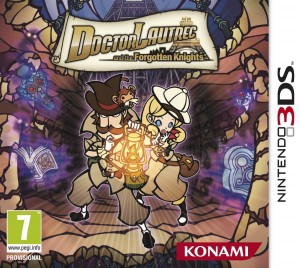