Detective Inspector Hector is back, and he's bigger and badder than ever in today's release of Senseless Acts of Justice, the second episode of Hector: Badge of Carnage. And for Hector, that's saying a lot (especially the "bigger" part).

After reluctantly performing good deeds at the bequest of a hostage taker in Episode 1, Hector finds himself staring down the wrong end of a sniper rifle when the new game begins. After blasting his way through that little predicament, the slovenly "fat arse of the law" must "hunt down a psychopath, all while he’s pulled down a twisted trail of meat, sin, sleaze and... more meat." This time around, players will also control Hector's hapless partner Lambert at times.

Unlike We Negotiate With Terrorists, the new game is offered for PC and Mac only as part as a full season purchase price. Available for $19.99 from Telltale's website, the good news for fans who already ordered the first episode is that an additional $9.99 will give you full access to both Senseless Acts of Justice and the upcoming third episode due next month. Alternatively, the new episode is available as a standalone title at the App Store for $6.99 on iPad, or $4.99 on iPhone. The first episode is also available, currently offered at a discounted sale price until September 1st.

If you missed Hector's lewd, crude, and eminently rude first adventure, check out our review of the game for full details. 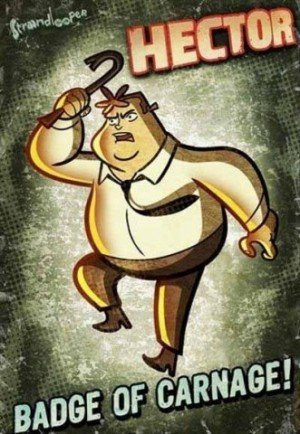 Finally Episode 2 is there..  this game rocks!