Crime novels are a regular staple for book lovers, but if you're looking for an interactive crime novel, look no further than today's release of Four Badges.

The newest text adventure from Malinche casts players as one of four possible detectives, beginning at a randomly chosen starting point with just one of four key pieces of evidence. In the quiet New Jersey suburb of Merridoc, two prominent members of the community were murdered in the night, and you learn of a third just after reporting for work the next morning. It's clear "you've got a serial killer tearing through town and who knows how much time to stop him before his next victim falls..." This won't be an open-and-shut case, however, as there are over a dozen different potential endings.

Four Badges reportedly works on all versions of both Windows and Mac OS X, and is compatible with Linux, Unix, the entire Palm family, Windows Mobile devices, most smartphones including Blackberry and iPhone, as well as the iPod Touch and iPad. The game is available for download for $29.95 exclusively at the developer's website. 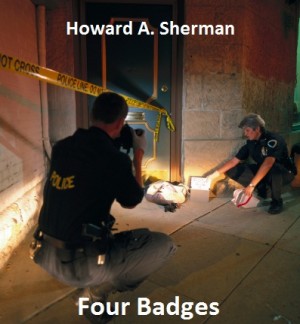