The Mystery of the Wicked Village now in restless production

Fans of Murder in the Abbey can sing "Hallelujah!" today, as Spanish developer Alcachofa Soft has announced production on a new adventure for Brother Leonardo in The Mystery of the Wicked Village.

While a completely standalone adventure, the new game once again garbs players in the robes of "detective monk" Leonardo de Toledo. This time around he's investigating the disappearance of his Order's prior when he's forced to seek shelter from a storm in a seemingly quiet little town. He soon learns that looks can be deceiving, however, as there are supernatural forces at work and "the Devil’s presence can overshadow even the most unlikely of places."

The Mystery of the Wicked Village will be presented in the same third-person, hand-painted style as its predecessor, as seen in the first screenshots. Not content to settle for more of the same, however, the developer is promising "artistic, technical and gameplaying enhancements" this time around, along with a more diverse setting to explore.

While no firm timeframe has been established, according to Alcachofa Soft the game is still some time off, with release likely falling some time next year. When we asked about publishing, the developers replied that not only is a downloadable version planned, they are committed to a Collector's Edition DVD as well, either self-published or in partnership with international distributors.

The Mystery of the Wicked Village 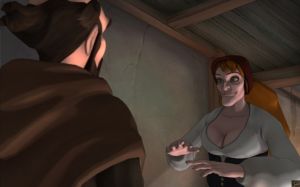 actually i noticed this preview by coincidence while going through Alcachofa Soft Games which i like so far ...
A Sequel to The Abbey ! hmm ..Nice and its announced almost 2 years a go!
any updates ?