If we've learned anything from the long-awaited development cycles for DARKSTAR and Gray Matter, it's never to write an adventure game off. The latest to prove this theory is Anima's Conspiracies II: Lethal Networks, an FMV adventure that's been in production since 2004 and is at long last nearing release next month.

A follow-up to the independent Greek adventure Conspiracies, the new game once again puts players in the futuristic shoes of Nick Delios. In 2063, Earth joins the Peripheral Galactic Alliance, and hopes are high for a new era of development, prosperity, and closer co-operation with other civilizations that will lead to the eventual solution of the political, economic and social problems of the planet. But Delios, a former private eye and now a government secret agent, is accused of attempted murder of a high-ranking executive. Someone has framed him, of course, and in his effort to find the truth, he will find himself in the middle of multiple conspiracy networks throughout the Alliance, threatening its very existence.

The developers are promising a substantial play time covering twelve "worlds" of 8-10 locations each, including more than two hours of live-action video starring 80 different actors. For more information, head over to the official website, where the game will be available for purchase next week. 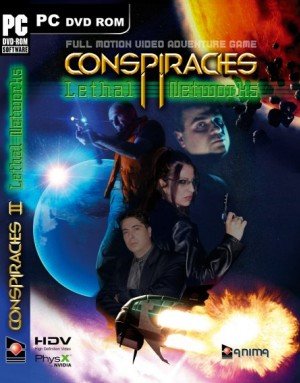 Think I’ll be checking it out, right after a demo is released. Looks intriguing.

this certainly looks interesting. especially since it looks like you can freely navigate a la tex murphy? im gonna check it out