Lace Mamba Global is at it again, which is good news for adventure fans. With an impressive string of so-far-exclusive adventure releases already under its belt (Ghost Pirates of Vooju Island, Black Mirror 2) and more still on the way (Gray Matter, So Blonde: Back to the Island), the UK company has just announced its latest coup, signing an agreement with Daedalic Entertainment to publish Edna & Harvey: The Breakout, A New Beginning, and Deponia.

Of the three, Edna & Harvey is the only game already released, finding widespread acclaim in Germany. The story follows a young woman named Edna, locked away in an asylum with no memory of her past. All she knows is that she desperately needs to escape, since she's not the least bit insane herself, as her talking stuffed bunny Harvey will attest. The game promises to hearken back to the point-and-click comic classics of old, yet with a surprisingly deep backstory that unfolds the more Edna discovers about her incarceration. The UK release is being labeled a "Collector's Edition", though no specific details were provided on what extras will be included.

A New Beginning is a topical eco-thriller dealing with global warming. In the year 2500, the world is on the brink of cataclysmic destruction, and the planet's only hope is to send someone back in time to 2008 in an effort to avoid the crisis before it's too late, facing opposition from a greedy oil tycoon in the process. For more about this game, check out our interview with the developers and the new official website.

In the most of unusual of love stories, Deponia plunges players deep into a world of garbage. Literally. An unpleasant man named Rufus lives at the edge of an improvised village made of trash, dreaming of a better life in the the floating cities above. When a lovely young woman crashes down on the planet's surface, Rufus hatches a plan to return with her once he realizes that he's a dead ringer for her husband. More information is available in our Deponia preview.

No firm release details have yet been announced, but this news represents a significant signing for adventure fans, so we'll be sure to keep a close eye on all three games in the coming months. 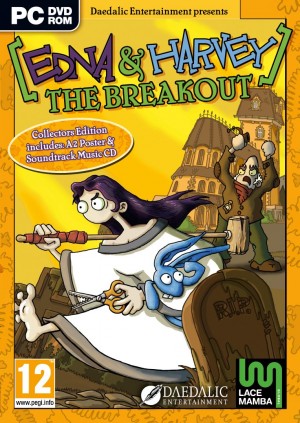 See all games in the Edna & Harvey series

YES! Oh man, a thousand times, yes! This is the best news I’ve seen this morning. Thank you

I’ve been desperately waiting to play Edna and Harvey, hopefully I’ll be able to get it via digital distribution as I’m here in NA and there hasn’t been much news about its release.

Wonderful news! I’ll play Deponia and A New Beginning in German, but it’s really great for the English-speaking world that they will be released in English. I sure hope my beloved Edna and Harvey will be received as well as in Germany.