In advance of the upcoming release of Crime Scene, a trailer and playable online demo now offer a first-hand look at the new forensic investigative adventure from White Birds for the Nintendo DS.

Also known as Criminology in parts of Europe, Crime Scene puts players in the role of Matt Simmons, a young detective recently promoted to the forensics team. Using nine different tools to locate and collect evidence, and another six tools to analyze it, players must then interrogate suspects and build a convincing case against the culprit with the clues uncovered, all under the watchful and cautious eye of your boss, Alexandra Malone.

For a more hands-on experience than simply watching the new video, the browser-based flash demo offers a few tutorial exercises to introduce some of the investigation and analysis elements. Though the online demo is done in simple point-and-click style, the full DS version will include additional gameplay features that make extensive use of the handheld's touch screen and stylus.

There is no firm release date yet for Crime Scene/Criminology, though the game is expected to be launched in some territories within the next month. 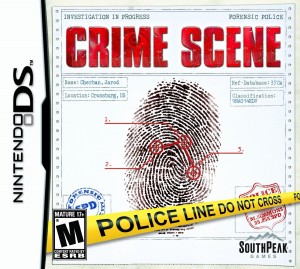