Ben Jordan is no stranger to Underground adventure game fans. Francisco Gonzalez, better known as Grundislav, has five Ben Jordan games under his belt so far and with the release of his newest, Ben Jordan: Scourge of the Sea People, he shows no signs of slowing down.

Following the dramatic end of the fifth case, Land of the Rising Dead, Ben Jordan and his paranormal investigation team decided it was time for a vacation. In the remote fishing village of Agia Anna, Greece, however, they "soon learn that even while on vacation their work is never done. It seems that ancient creatures of legend known as the Sea People have been emerging from the ocean at night and dragging villagers down to the depths to eat them. Ben, Simon, and Alice must investigate and stop the scourge of the sea people!" 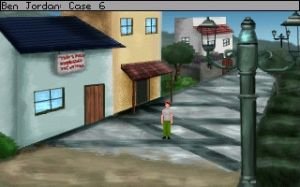