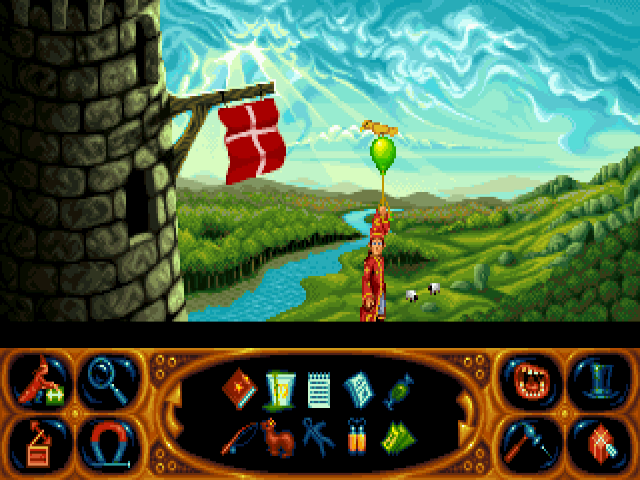 I’m still half asleep and I don’t want to wake up, so today’s a quasi-rerun, with some random screenshot that was sitting in my ScummVM captures folder.

Simon 2!!!! My favorite adventure game! must played it dozens time.

Apart from being voiced by Rimmer, I never did get the appeal of this series.

Discworld did it way better.

I’m a huge fan of the first two and could bring myself to play the third one.

Great Sequel better than the 1st (slightly)
anyways , i think AdventuresSoft would had been a trade-mark of the classic adventuring Scene just like/with Lucas, Sierra and Cyan but due to their/it short period of activity and the little number of the games they released they didn’t get that honor but still a die hard Adventurer knows AdventureSoft Quite Well.

I am one of the many people who loved the first two Simons (I think that the 2nd was slightly better) and didn’t even tried the 3rd. Those blocky 3d graphics were surely outrageous…

The first two Simon games are amazing. And thumbs up for using this screenshot with the danish flag present, huzzah!

Such a shame the series was beaten to death with the third game - and then reanimated and beaten again with the (I heard) horrific fourth and fifth games.

Replayed the first just the other week, and I’ve been considering giving the second a replay these past few days.

@Lucien: Chris Barrie only voices Simon in the first game, sadly. Brian Bowles voices him in 2 and 3. Brian is recognisable from the number of characters he voices in Beneath a Steel Sky!

I LOVE Simon 1 and 2!!! Both are amongst my all-time faves. Simon 2 is even marginally better than the first, imo!
Definitely my kind of game, my kind of humour…

Due to production delays, graphics in Simon3D were HORRIBLY outdated, so the game looks extremely ugly and blocky, but I found that the humour in the entire first chapter was once again top-notch, and even some timed puzzles didn’t bother me at all.
What DID bother me (and what’s another big reason - apart from the graphics - why this game was/is so vilified) is that it’s insanely buggy. I never got to play further than the first chapter, because there was a game-breaking bug early in the second chapter that I never managed to get around. And I had experienced several bugs/crashes during the first chapter as well.

I’m going to try the third game again sometime in the distant future but I hope I find some patches first. Bad graphics I can live with, and both the story and humour were to my liking (well, in the first chapter at least)...

The bugs, crashes and ugly graphics make the game seem a LOT worse than it really is, imo. Besides, isn’t there a user on these forums who has “Give Simon3D a chance!” as his signature?

For me, Adventure Soft’s true classic is the original StS (The Feeble Files gets the second place). It has a cohesive game world to explore (town, wood, and mountains), populated with many unforgettable characters, like the barbarian, the bard, the troll, or the oaf, not to forget the horrible owl (another “Cedric”) or menacing animated chest. And the script is the most humorous one in the series (in the sequel it became less witty, and the tone of voice changed as well).
Never finished the third installment, because I got tired running through the vast environment (with the obligatory interface instruction at the beginning, I believe, which is a nasty way to start a game if it isn’t optional). The German episodes are decent, though the return of favorite characters like the swampling was a complete failure.