What game have you just finished?

I bought Chook & Sosig: Walk the Plank because the AG reviewer gave it 4 stars and it looked nice. The graphics are great but I’ve had my fill of fetch quests and 80-90 percent of the puzzles consist of fetch quests, which results in lots and lots of boring backtracking. I found the meta stuff of playing a game within a game distracting (loved it in Stories Untold) and the humor didn’t work for me. I’m not saying it’s a bad indie game, but not a good one either imo.

Technically speaking, I have finished the game. But I was still working on several puzzles, so the ending after one particular fetch quest came as a total surprise. I was sure something was wrong, even more so when the menu came up and the options “continue” and “load” were greyed out. Huh? But this morning I could click on “continue” and the game took me back just before the ending which I can now avoid. I had a quick look at a youtube playthrough and apparently I missed about one third of the game. I hope that’s not the developer’s idea of having a little fun with the player.

Got a new PC with a decent graphics card a few weeks back. Meaning I can run even very recent power hungry games in their full glory. One example is The Painscreek Killings which I just finished. So much better than I anticipated (hadn’t read AG:s review before playing). Pretty hard to get through without help due to its open world, no handsholding approach and a couple of badly clues puzzles but a great and satisfying experience once you figure things out and make progress! One of the best games I’ve played in recent years.

Now on to see what remains of Edith Finch.

Just finished Runaway 3, and with that, the entire trilogy.

Throughout the series, there were some nice clear references to classics in the genre, like Monkey Island (ep 3) and Indiana Jones (ep 2). I bet the cockroach in the final chapter was a wink to Bad Mojo. Were there any other tributes I missed? Quite possibly yes, since I still need to play many of the classics.

I’ve already posted about Whispers of a Machine and Detective Di: The Silk Rose Murders in their respective threads, so I’ll just say once more how good I thought they were. Just the sort of investigative game that I like, well thought-out and written. Whispers had fun innovative mechanics that worked well (special abilities that develop according to your choices, making for a highly replayable experience), while Detective Di had a refreshing setting (VIIIth century China) and a story that I particularly liked.

I then played The Invisible Hours, which, as the first sentence on the screen states, is not a game. It’s like an evolution of the movie medium (or it must feel like it when played in VR) - you wander through space and time in a pre-recorded sequence of events, unravelling threads and discovering clues to the initial mystery and much more. Well, I must say it was surprisingly gripping. However, I was shocked and appalled by the secret bonus ending: the game literally tells you you have to kill yourself, over and over in a loop that you can only escape by jumping through the window - well, the character, of course, but you’re not really supposed to play a character - I understand that’s the point of it and you get to think about the voyeuristic perspective you’re experience and all that but frankly, considering the number of people suffering from depression, chronically or at some point in their life, it just sounds dangerous and idiotic. I know it was very hard for me to bear and the voice repeating it is now time for me to jump left a lasting scar in my mind. I can’t even begin to think of how it would have felt in VR..

After that, I played Last Day of June. Unfortunately the game succumbed to the very pitfalls I feared it would meet and optimistically hoped it would avoid. The graphics were lovely in a blurry, somewhat impressionist way, although I didn’t care too much for character design (especially the protagonist, for whom I failed to feel any sympathy). The idea of changing the past by reconstructing memories through paintings is charming, albeit a bit naïve. The story and its execution felt superficial and cliché-ridden to the point of being annoying. I feel sorry that I have such harsh words and would not want to discourage anyone from trying out the game if they feel drawn to it - it just did not resonate with me.

Then I played What Remains of Edith Finch (yes, I am a bit late to the party). My limited specs prevented me from fully enjoying it (I encountered a glitch that was fortunately well-known and documented, and had to skip one of the latest stories because it was unplayable - it was not game-stopping and I could watch a video of it later online, and judging by my reaction it’s just as well I didn’t play it myself as it would have been too emotionally overwhelming haha). So that was a beautiful game/linear exploration. The mystical, ethereal atmosphere surrounding the story prevented it from ever being dull despite the little amount of interaction you have. It was always interesting, sometimes bewitching, sometimes even moving. Some passages made me uncomfortable (I hated having to hunt living creatures in the first story), some were dragging a little (I thought that swing sequence would never end). It’s rare that a work of fiction achieves to create such a wide and refined array of emotions, from the exact same thrills you feel when you’re 8 years old and reading horror stories in the safety of your bed in your vacation house, to the bewilderment of dread mixed with pure joy, and a desperate abyss opening under your feet before an almost-too-close-to-home depiction. I’m just this close to saying it was brilliant. It was a wonderful universe in any case, broad and deep, original and inspiring.

Whispers of a Machine and Detective Di: The Silk Rose Murders in their respective threads, so I’ll just say once more how good I thought they were. Just the sort of investigative game that I like, well thought-out and written. Whispers had fun innovative mechanics that worked well (special abilities that develop according to your choices, making for a highly replayable experience), while Detective Di had a refreshing setting (VIIIth century China) and a story that I particularly liked.

Glad you like WOAM, yes, I too found the mechanics innovative.

The Place for the Unwilling: aesthetically gorgeous exploratory adventure. Time is ticking everyday and the mystery of what is going on gets very confusing fast all the way till the very end. A bit artsy and meta, I enjoyed little side quests and getting to know the residents, but I felt that atmosphere was a bit lacking - as of they could have done A LOT more with what they had. Right now there are many bugs and glitches the devs are trying to fix fast, but all things considering $15 is a bit much for the title.

Ace Attorney Trilogy: LOVED IT. Haven’t felt that strongly about characters in a while, also the music is fantastic. I can see where Danganronpa (which I also liked) got the inspiration from.

Demetrios the BIG Cynical Adventure: I liked it as a middle of the road funny adventure. Lots of potty humor that quite often comes out just gross (there is an option for how much of that you want in the game, but I feel like it was meant to be played on “Give me all of it” option), but overall engaging silly story with a doofus as a main character ended up being fun 8-10 hours.

On to: Truberbrook, Supreme League of Patriots part 3 (I’m finishing it mainly because I started. I liked the first part because of the writing,  but the second got a bit tedious…) and Experience 112, as I’ve never played it.

I played the Ace Attorney Trilogy way back when on the Nintendo DS, it was simply amazing then. I am sure the games are just as magical today. I need to replay them.

I’m playing “Ace Attorney Trilogy” for the first time on my Switch. I’m on case #3 in game 1, but haven’t quite gotten into the game yet, but I’m beginning to like it. 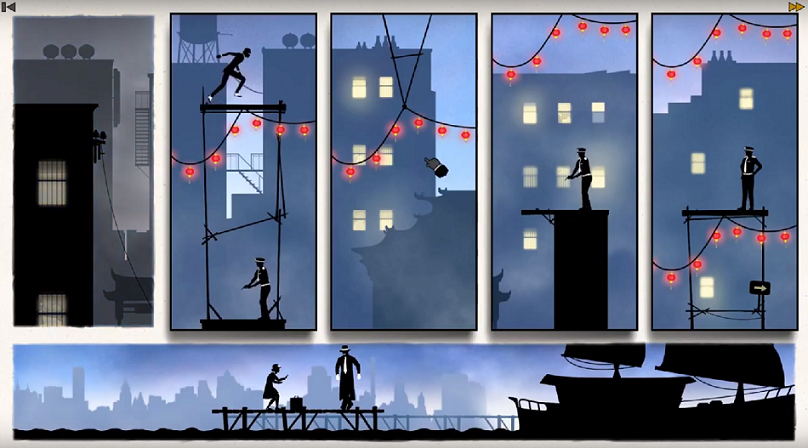 I had lots of fun with the puzzle game Framed Collection. Originally for mobile phones, but I don’t like playing games on a small screen. It has a noir setting, cops, guns, pursuits etcetera, with a vague plot and nice jazzy music. The puzzles consist of moving panels around (a bit like Gorogoa, but Framed 1 and 2 are older). Sometimes panels can be rotated or have to be used more than once (like in the screenshot), which brings the element of timing into play. But if you know which panel should go where the timing is not a problem. A few puzzles were complicated and took me quite a while, but most are not very hard. Cool game.

I played Observation over the weekend. It’s a really cool and interesting Scifi mystery where you play as the space stations AI. A neat concept and done pretty well. It’s a bit slow paced at times due to the controls, for example, using the cameras in each area to search for interactive documents, laptops, etc. to piece together the backstory. But the puzzles are integrated very well. You will need to work with Emma to fix things and gain access to different parts of the station, inside and out, as you try to figure out what happened. The story isn’t original by any means but it still has a nice twist. If you are a scifi fanatic, such as myself, then I definitely recommend it.

(I spent around 12-14 hours on it, mainly because you will need to do a lot of exploring to get all the possible data and info to complete the backstory/character profiles.)

Good to know you liked Observation. I’m still having some doubts about Epic Store but I really want to play this game.

I just finished Gibbous - A Chtulhu Adventure testing Spanish translation, but I cannot say anything yet about it (ahem, GOTY, ahem…)

I just finished Lost Horizon 2 and Yesterday Origins. Both were better than I thought they would be. I might even play them again in the future.

Recently finished What Remains of Edith Finch and Return of the Obra Dinn. Both highly recommended games. Obra Dinn was really good, although I did not completely understand why some of the people onboard acted the way they did. For example, why did the Swedish guy (the captain’s steward) chop the leg off that other crew member? Because he knew something about the “monster thingies” that the rest didn’t? I noticed that he was there to see Nichols bring the things to the ship, but what happended then that made him attack one of the men who had carried one of the monsters towards the lazarette? Or did he do it in order to be locked in with the “things”? If so; WHY?

Maybe a second playthrough will clear this and a few other things up.