STYGIAN: Reign of the Old Ones, A Roleplaying Game of Horror, Loss & Madness

Welcome to the Fathomless Depths of Stygian’s Inventory System!

Let’s start with a video showcasing the system, and then talk more about its features and our design approach.

Paper Doll - shows all the items the player currently has equipped, including weapons, outfits, artifacts, a backpack and things of that sort. We are pretty sensitive about customization and aim to display the player’s choices with as many visual representations as possible. We’re also designing unique models for special items such as rare weapons and gadgets. We are keenly aware of the fact that we RPG players love to play with our dolls, preferably voodoo dolls… 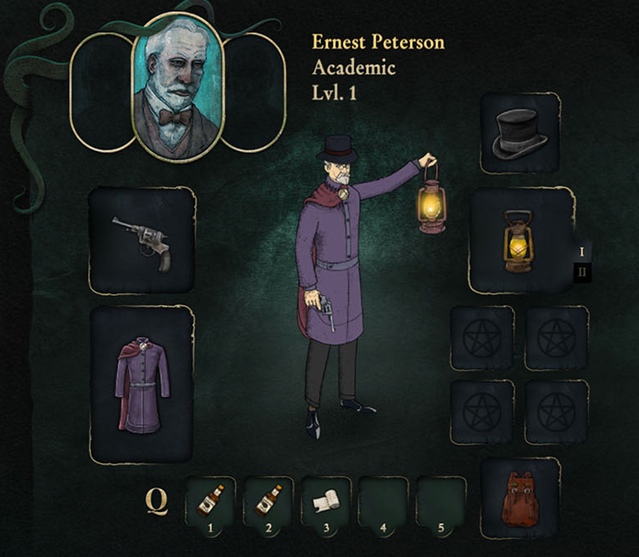 Equip your character, in style…

Statistics - shows almost all of the secondary statistics which affect combat and exploration. Potential effects of the items will be displayed as a tool-tip in the form of colored numeric modifiers.

We haven’t forgotten you Min-Max scholars

Party inventory - shows all items in the party’s possession. Stygian uses a shared inventory system so you won’t need to spend time shifting carried items from one character to another. Less item management, more black magic, count us in! 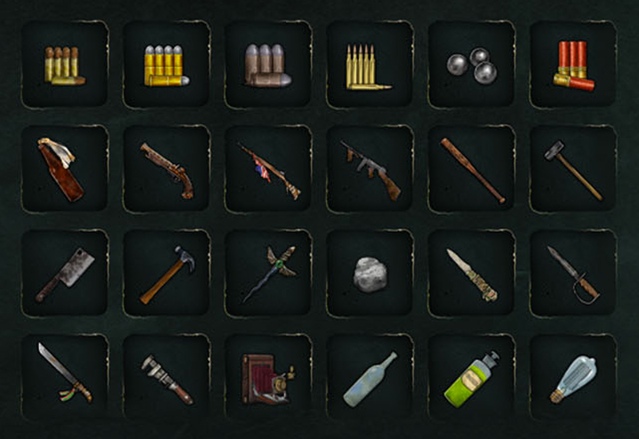 Did we tell you that we’re also fans of adventure games?

Item category tabs - grant easy access to all the items you’ll need to prolong your hopeless struggle against the shapeless horrors of the abyss. Tabs are divided into the following categories: Weapons and ammo, outfits, consumables, tools and gadgets, artifacts, books and tomes, quest-related items, miscellaneous, and of course the favorites tab, which can be customized by the player.

Quick items - allows you to set certain items to be instantly available during combat and exploration. Don’t forget to add your favorite smokes to one of the quick item slots. Cigarettes are essential for reducing stress but remember not to smoke them all because the Cigs have become Arkham’s rising currency!

As you can see, we tried to build upon the inventory features typical of western role playing games while balancing convenience and thematic flavor. We also chose to use larger icons for our items in order to include more detail, increase immersion, and show off the efforts of our talented artists.

Finally, for the closure of this unholy update, Cultic Games present you the talented leather artisan, Master Sebo, working on our Special Edition Game Tomes! These hand made books of madness will bring doom to your neighborhood when the game is out. 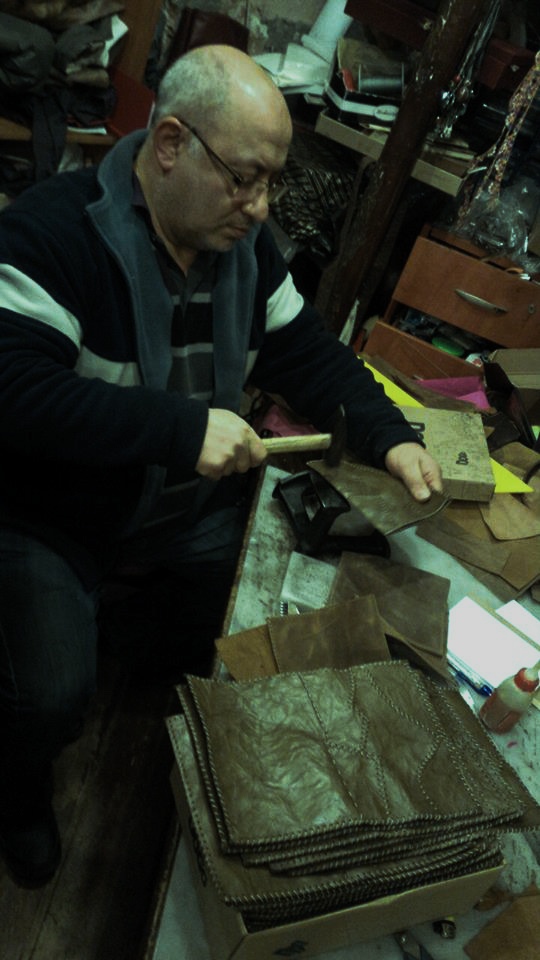 So please share your opinions with us fellow cultists and seekers of the forbidden knowledge. Are we walking the path of desolation gracefully?

Until we meet again, sailing through the tides of the black unknown…

The Menace in the Ambience: Composing Stygian

Greetings Listeners of the Forbidden Melody!

In this update we’d like to share some of the musical compositions you’ll be hearing throughout Stygian and share our composer Asli Kobaner’s thoughts on the process. We’ll also be unveiling more on the production plans of Stygian.

Please note that all the tracks are still work in progress. This means we’re still measuring the sanity levels of the captured subjects while exposing them to Stygian’s music constantly. We will update you on the results.

In the meantime, here are some sound samples through the link below:

Let’s hear what Asli has to say on her work:

“Since the beginning of Stygian, I’ve been closely entangled with researches on game music architecture. I endeavored to develop a general approach by identifying the structural model and its sonic needs through collective brainstorming and individual work.

In this context, quest flows supply a narrative ground to distinguish different sound types and musical content. Lists and maps specifically serve to track and categorize these materials: a general map for tension and release patterns throughout quests, an inventory of virtual instrument plugins, effects, sound banks and recorded performances, lists regarding the amount of diegetic and non-diegetic material. All these processes aim to bring out the sonic world of Stygian.

I think the boundaries between what is “music” and what is “sound”- yes, this old issue- is relative, or at best, obscure. Similarly it can also be hard to separate the “musical” composition from the sound design when it comes to Stygian. Even though most of the audio materials are functionally categorized (such as foley sounds, ambiences or leitmotivs), they feed each other blending in various combinations throughout the gameplay. With an assemblage of these echoing, imitating, contrasting, looping, music is adapted to the variability of the gameplay duration.

As for the musical grammar, certain stylistic languages are employed:Indian ritual references, period music such as early jazz and late romanticism, and a wider array of musical expressions influenced by the works of Jonathan Harvey, George Crumb, György Ligeti, Alvin Curran, Stravinsky, Gerard Grisey and Fausto Romitelli among others.”

And here we present you the illustration you’ll be seeing at the combat loading screens. With this approach, we aimed to create a more general feeling of terror and ever-shifting, constant sense of danger instead of focusing on individual Mythos entities. 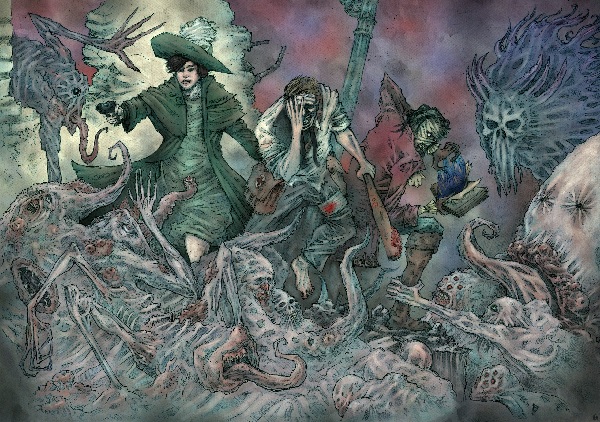 Do we need to say that the figure in the middle of the party represents your character?

Last but not least, we finally have a release date for our special backer demo. You’ll be wandering the uncanny streets of our doomed town in August, this year. We were expecting to land it in June but have decided to share a more complete experience. Expect more than a thirty minute long starter snack… 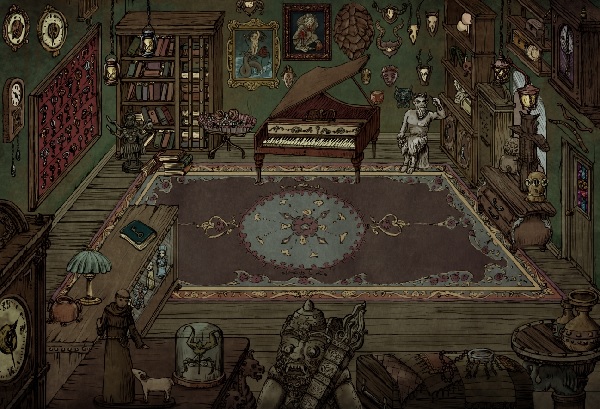 As for the release date, we’ve been seeing the possibility of Stygian becoming a more defined and involving game each day as we complete the tools and systems which enables us to create more content efficiently. We believe we can turn Stygian into a longer and more polished experience from a humble indie title with a modest budget.

Let’s see what our extended demo has to offer, then we can talk more about our wicked plans.

We’re also working on the Dreamlands quest as we promised, along with the new archetype Explorer and her prologue chapter.

We have to go downstairs now. You know, unfinished business in the torture chambers and all…

We’ll meet amidst the black seas of infinity.