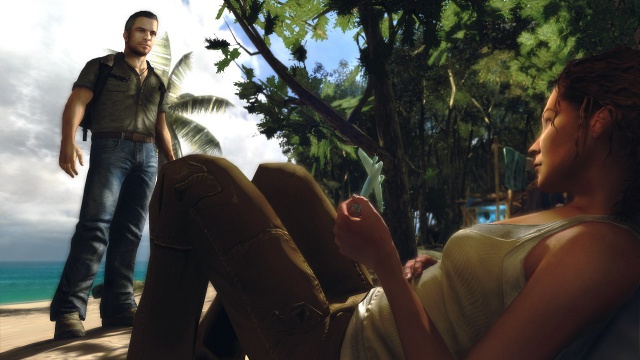 Eight years ago, on 22 September 2004, Oceanic Flight 815 crashed in the Pacific. This gave rise to a roller-coaster of a TV series, which could go from the most poignant to the most stupid—and to an adventure game, Lost: Via Domus.

Does anyone remember that game? Was it any good?

(Does anyone miss Lost?)

The only Xbox game I have apart from oblivion that I have S-Ranked.

The game is dreadful and very very easy.

I used to be so obsessed with LOST at one point, but then it pissed me off and became so stupid, so now I mostly hate it.

I bought the game, tried the first few minutes, and then got bored.

Never liked LOST, it was pretty dreadful right from the get-go from my point of view.

My wife and I really liked Lost, partly because of the mysteries and such, but after a while it was more about finding a lot of the CHARACTERS really interesting, and wanting to see what happened to them next. We did get annoyed at those points where it became rather clear that they were making up explanations as they went along (or, to give the benefit of the doubt, at least changing whatever ones they may have had in the beginning, to fit with some new idea they had along the way). To my mind, if you are going to have a show that relies heavily on mysterious happenings, you BETTER know the answers in advance.

But as to the game, while our interest in Lost definitely made me give the game a look, my research QUICKLY revealed that the general consensus was that it was a lousy game. Not only that, I got the impression that it barely had anything to do with the cast of characters that we had become interested in, and so wasn’t even worth wading through as an adjunct to the show.

To my mind, if you are going to have a show that relies heavily on mysterious happenings, you BETTER know the answers in advance.

When Lost first aired, I taped the episodes (to watch them later with commercials filtered out). I accidentally forgot to tape the fifth episode, so that’s where I stopped following the show. Initially I was going to watch the entire thing on DVD until I found out that the writers themselves didn’t even know where they were going with all the mysteries. That killed the series dead for me.
Haven’t been interested in the slightest since.

Making a series with plenty of mysteries and not knowing how to answer any of it is SO not done, it’s practically worse than Dallas scrapping an entire season as “it was all a dream” just to revive Patrick Duffy…

In other words: this game doesn’t interest me…

Never been interested in the series… And, judging by a lot of the comments on how silly it gets, it doesn’t sound like I’m missing anything.

Bah, Lost bashing. It seems to be a trend these days. The series is not perfect, it especially drags around season 3 or somewhere around there, but there are some great moments throughout the series, some great characters (no, I don’t mean Jack or Kate) and interesting mysteries. The finale was a bit underwhelming too but I still wouldn’t change a second. Might even watch the series again in a few years.

Considering all the crap people actually watch and the series that get their 8th season without zero actual talent or content, I find it a bit amusing how people go on about “silly”, “plotholes”, “credibility” and such even about the mildest issues (which sometimes are just in their head) and seem to actually think that the good show they liked and watched for a season or two is suddenly the smelliest crap in existence because it took a turn they didn’t like or they slowly lost interest.

I was only mildly interested in the Lost game because license games usually are pretty crap. But I might give it a try one day.