Let’s Play - Chronicles of the Sword!

In this episode (until I get back to Keepsake and Spycraft), I’ll run through the (not so) epic game set in the Arthurian times - Chronicles of the Sword! Quite an underdog, let’s just see what this game is about! I’ll be playing it for the first time (just saw a glimpse of it 20 years ago). If you feel brave enough, hop along, Sir Knight!!!

That’s not you on the left. It’s a priest who’s about to be murdered.

This is your character, at the other part of the castle, about to receive an accolade! Also, does that man on the right wears a tie?!!

Worst. Side view of a character. Ever.

Anyway, Sir Gawain is set with the first official task as a new knight - you must find Merlin!

The only trouble is, no one tells you where Merlin lives! OK, how hard can it be?

If you ask any character about Merlin’s whereabouts, they will talk in riddles.

Is my character just an almost completely bald on the top of the scalp?!

I thought this is a small town.

For Christ’s sake, just tell me in plain language where Merlin lives!! I’m not looking for Merlin as a part of some initiation trial, you’ve asked for him urgently!!!

Perhaps he lives in a castle.

The main character sounds like the hero in Black Mirror. Just worse.

You are truly crazy diego as this game is considered to be quite bad! However, I loved some of the humorous aspects of it but unfortunately haven’t got time in the next few weeks to fire it up on my PS (the only version I have) to play. I will follow your thread though as I have some weird fondness for the game!

So far, yes! Merlin was difficult to find!

What on earth is going on with our protagonist’s head? Are we some sort of half-dinosaur ape hybrid?

Is my character just an almost completely bald on the top of the scalp?!

He is clearly a distant relative of the Flatheads. Remember Zork? 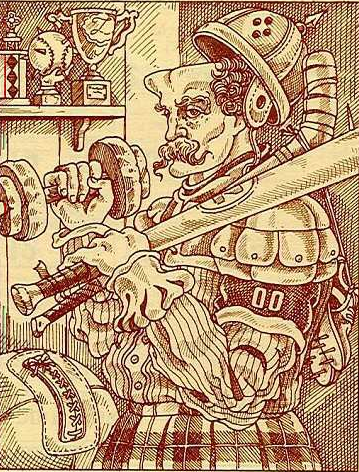 What on earth is going on with our protagonist’s head? Are we some sort of half-dinosaur ape hybrid?

He is clearly a distant relative of the Flatheads. Remember Zork?

LOL! Yeah, Sir Flathead shall he be called from now!

Actually, in the cutscenes, our bald, longface hero turns into a real hunk:

But now, let’s go back to Sire Flathead.

In this game, even 14 year olds are professional bodybuilders.

I have to say that the game possess that something many games fail to achieve - it will give some feedback in puzzles, like a puzzle where you’re on the right way, but still not right there.