I definitely prefer B. I hate spending time trying to solve a puzzle only to find out that it was only because I missed a hotspot

I’m not a big fan of hint systems because of the temptation to use them.

Definitely B. Hard puzzles are good. But if I’m banging my head on the desk and then discover it was because the graphics weren’t clear enough then I’ll be blaming the game rather than kicking myself for not getting it sooner.

But I wouldn’t write A off (or failing that, provide such a hint guide online or something) - if I do get completely stuck on a puzzle, I’ll end up looking for help somewhere. If all I can find is a walkthrough, that will not only spoil the puzzle completely but might spoil other things while I’m trying to find the bit I need. If I can get a hint specific to the puzzle I’m stuck on, I can still feel like I’ve mostly solved it myself. So something along the lines of UHS/InvisiClues is good.

If you asked me the same question few months, or a year ago I would tell you to go with the “A”. But now, even when Daedalic has succumbed to the “Dark Side”

, perhaps you can be the new torch bearer and bring the “balance” on the market! Go with the “D”. To b(a)ldly go where no man has gone before!

Thanx to everyone who responded, it helped us to make a decision

When looking at all sources, the choices were mostly B or D, A was very rare

So, our final decision is to include a mix of B and D. The object highlight will be there but turned off by default (having in mind “hard core” p&c gamers). Players who prefer to play with the highlight system will have the option tu turn it on in the settings. We think this is the best solution for all types of players. Not having any help system at all would be to risky, because even the hard core p&c players mostly voted for the highlight system.

Merry Christmas to all! 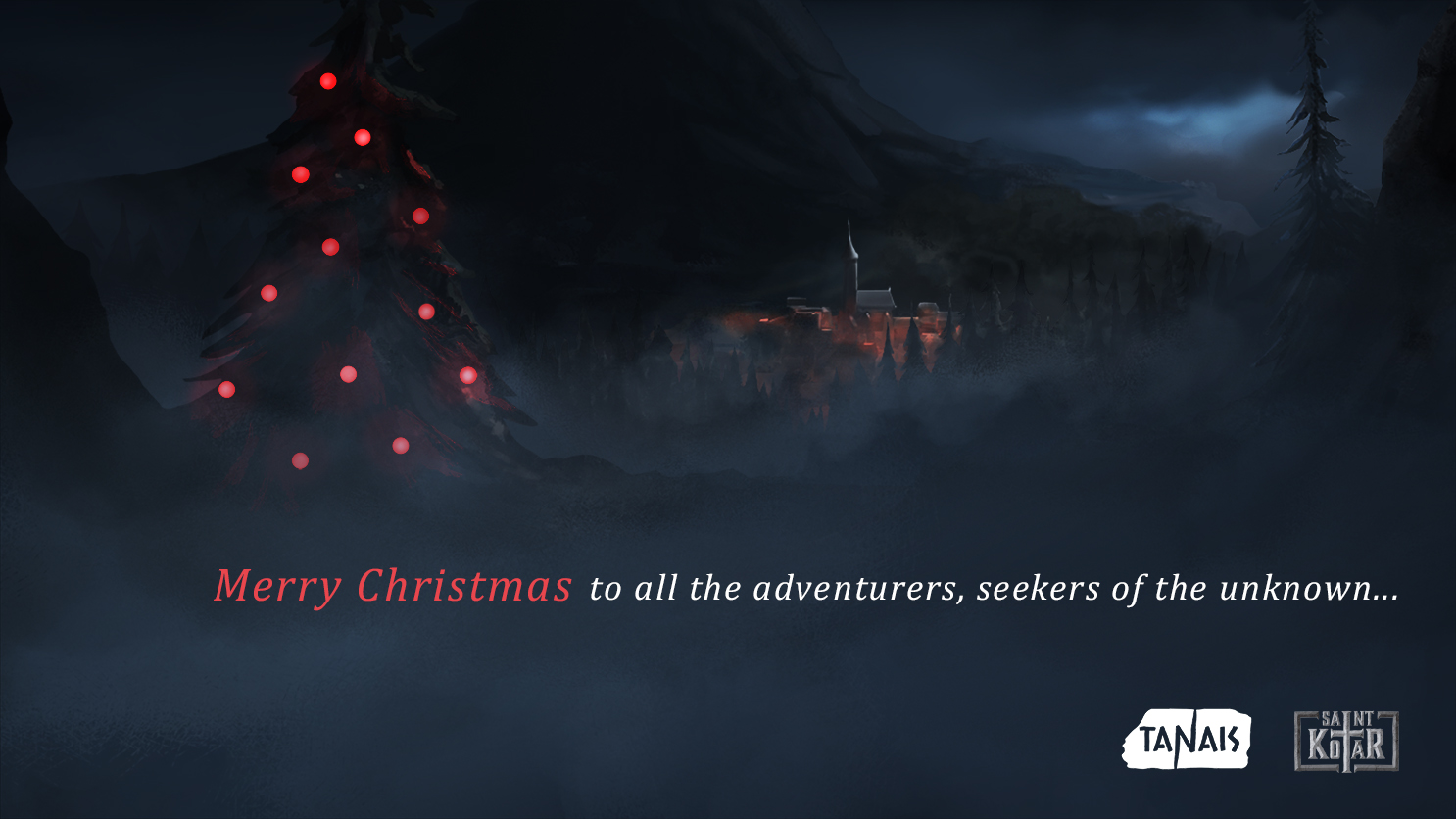 Hello adventurers! This is our first post this year, so let’s make it worthwhile! 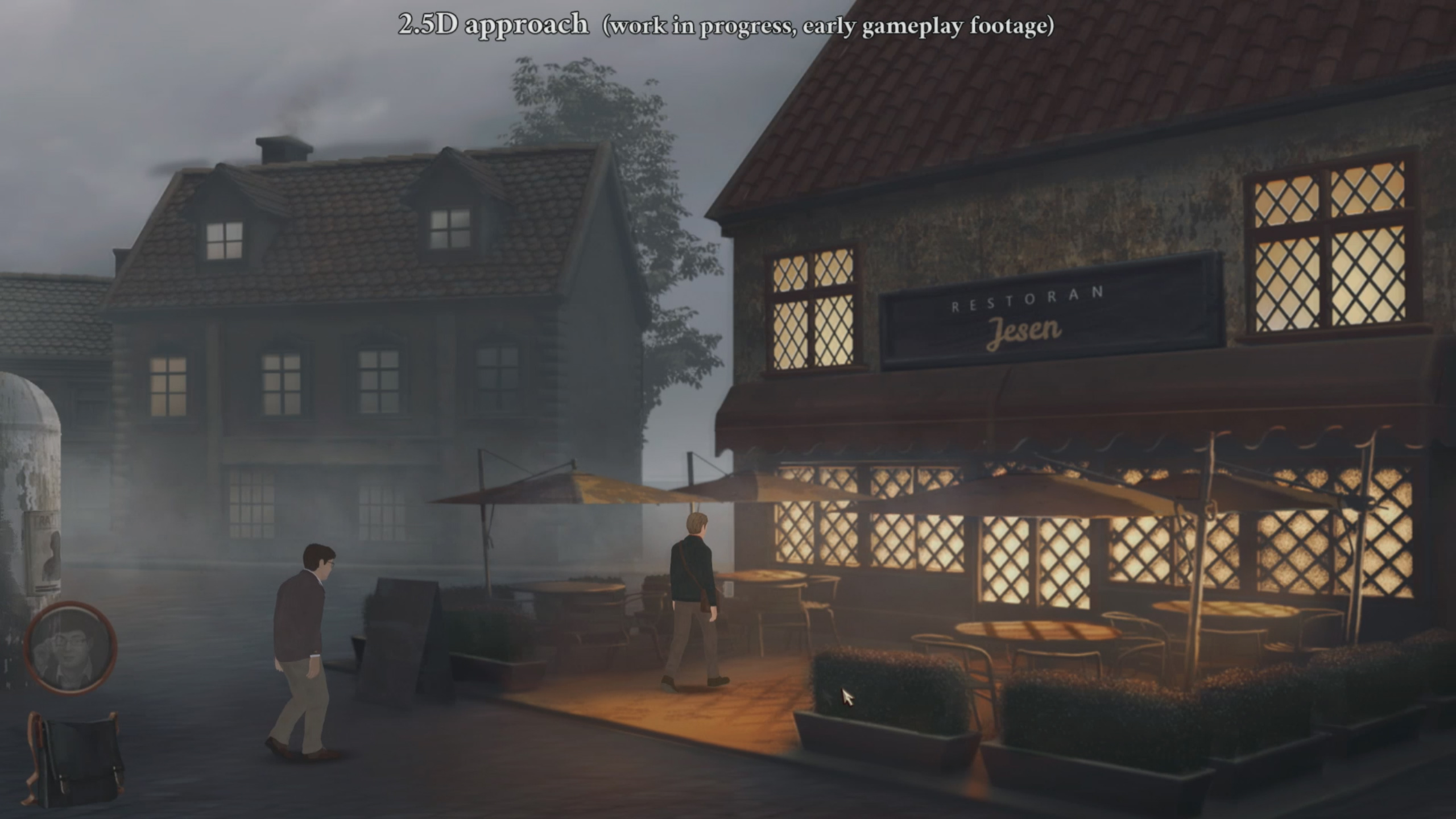 After months of testing and brainstorming, recently we’ve finally decided Saint Kotar is going to be a 2.5D game!

To avoid any misunderstandings how’s this decision going to impact the visual look of the game, we’ve made a video showing the difference between 2D and 2.5D approaches. Additionally, the video shows some early gameplay footage and mechanics, along with the original music themes and sound effects made by our own composers in the team. But please do note that the footage is pre-alpha and does not represent the quality and visual look of the final product. Everything you see in the video will be improved and there’s still a lot of work to be done!

You can watch the early gameplay footage video on our YouTube channel (turn the sound on for better immersiveness):

For a much more detailed explanation of why we’ve decided for the 2.5D approach, you can read the newest blog post on our official website: 2D or 2.5D? The verdict!

We are currently developing a playable demo of the game set to be released in a few months (late June or early July). Its release will mark the start of the Kickstarter campaign - allowing us to finish Saint Kotar where we’ve already invested so much work, creativity and love. Keep following us for more news and updates as we progress with the work on the demo!

Lots of love, work and commitment - that’s Saint Kotar under the hood

Lots of love, work and commitment - that’s Saint Kotar under the hood

Solid art and atmosphere , hope all those great backgrounds make into it

Solid art and atmosphere , hope all those great backgrounds make into it

Yes, of course. All characters in the game will be fully voice acted

All the concept art available here are going to be in the final game as scenes. Some of them will make it into the demo as well

Do note that they are for now only concepts, used in the build to make the video as well. There’s still lots of work to be done before having them in final stage.

Take a look at the Object Highlight System from the game!

The red color look is still a work in progress, it will be finalized in the testing stage. For example, we could decide to use an icon (a small circle for example) appearing above the hotspots instead of the color.

Almost 6 months ago we started a survey asking players to vote for their favorite help system in point and click adventure games. The results were in line with our thoughts, and so the decision was an easy one - we’ve decided to include the Object Highlight System as the only help system in Saint Kotar.

OHS won’t be turned on by default at the start, pressing the spacebar will trigger a question, asking if you want to turn it on. Pressing and holding the spacebar for 1 second will reveal all the hotspots on the scene. Of course, if you decide later not to use it anymore (to avoid being tempted), all you’ll have to do is to turn it off in the settings.

Good luck with it.

Good luck with it.

Any estimations when the kickstarter campaign will launch?

Any estimations when the kickstarter campaign will launch?

Saint Kotar’s Kickstarter campaign will launch once we finish the playable demo. We’ve encountered some development setbacks in the last two months (nothing severe, but took us time to overcome them), and so it won’t be ready so soon (it was planned for July).

We’re working hard to finish the demo as soon as possible. Additionally, since these setbacks delayed the release, we’ve started regard them as a good sign because launching a campaign in the middle of the summer probably isn’t the best of ideas, right? We are not having any sort of holidays, but most people (and players) go on holidays in July or August, and this could have affected our campaign’s success probably.

To conclude, we are aiming to release the demo in September or in the worst case scenario in October (the demo will be free of course), and at the same time launch the Kickstarter campaign. This will give us enough time to polish it properly and thus get the attention we need to succeed on Kickstarter. And, as a bonus, it will happen with the summer (holidays) ending or already over

When we have some big updates we always write them here as well. But, you can follow us for even more frequent updates on facebook, twitter, or you can subscribe to the game’s newsletter.

Here’s a new concept art from the game, which is actually closer to being a final in-game scene but in need of additional work:

Hi fellow adventurers, here’s a little update from us!

First of all, we present you the official cover of Saint Kotar: 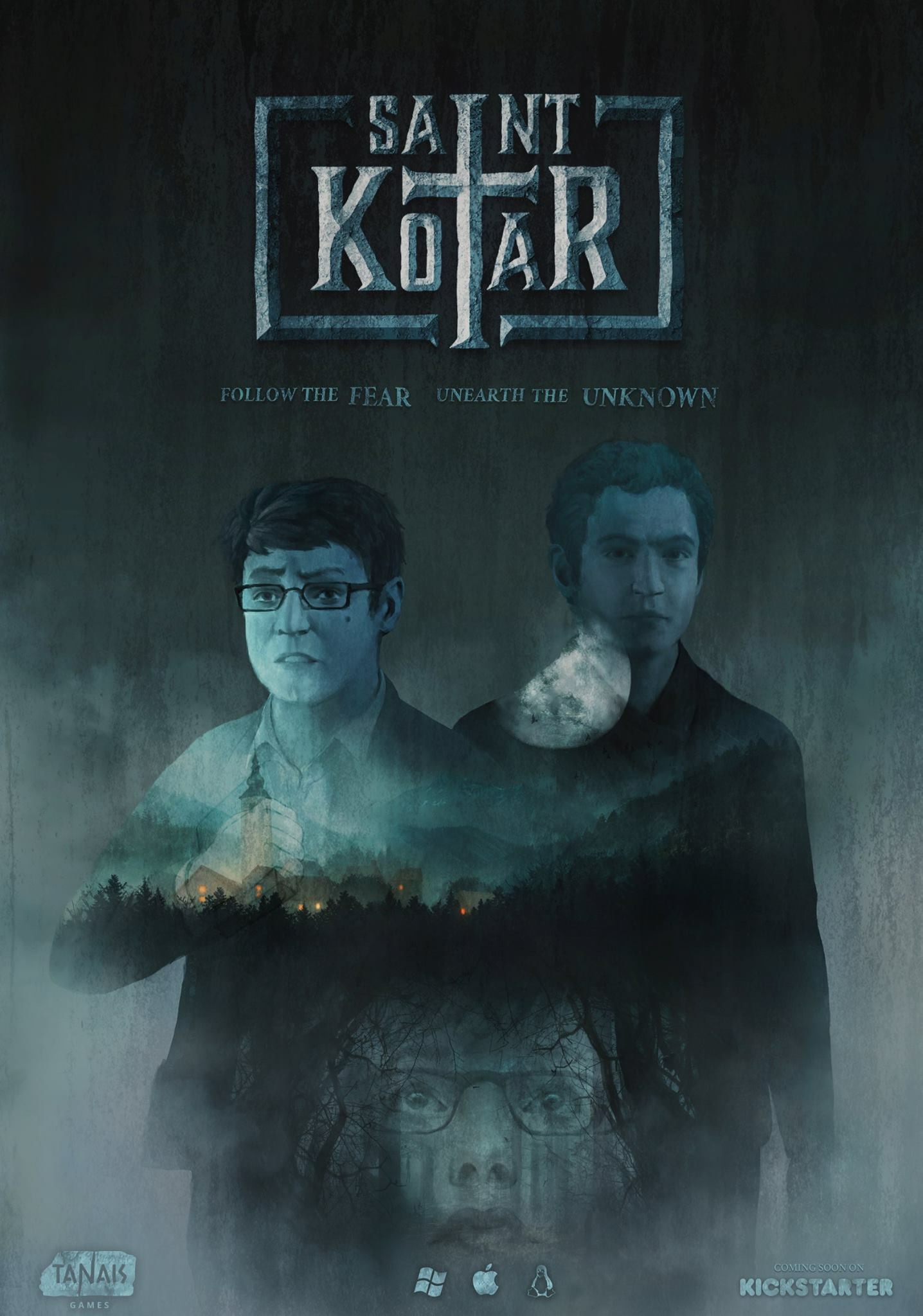 Our artist spent a lot of days and nights, fueled with caffeine, to make this poster/cover. We are proud of him and his work! We felt that the double-exposure technique, used on the cover, could work the best in our case. Judging by the reactions on our social network profiles (facebook, twitter and instagram), we were right

Second, we’ve decided to postpone the release of the playable demo for a little bit more. Rushing it would lead us to nowhere. We want it to represent the quality and experience of the full game as close as possible, and that takes a lot of time and work. With the release of the playable demo the Kickstarter campaign will be launched, which will allow us to continue the work on the full game until its completion. The exact date of the demo release (and KS campaign) is not decided yet, and we’ll have to wait until the end of September or beginning of October for that to happen.

Although it’s still a work in progress, with a lot of work still to be done, here’s a progress of a location at the lake (which will appear in the demo as well): 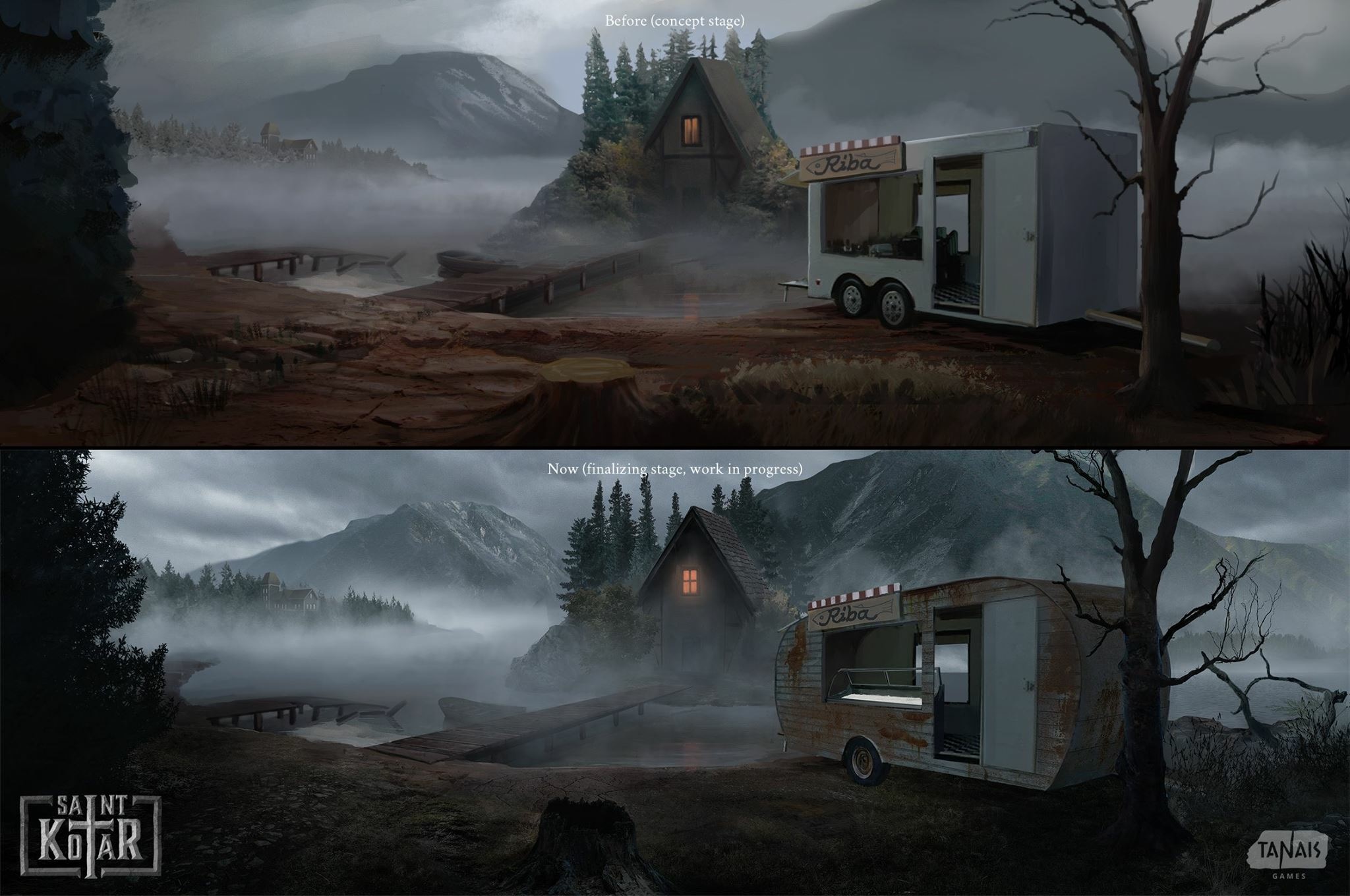