Welcome to the latest Casual Playthrough. 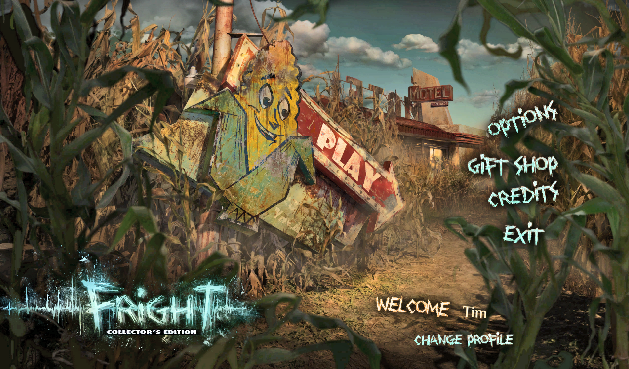 The game we are playing is Fright. One of its claims to fame is that it has the second shortest title of all casual games. If you leave out the punctuation, only FACES is shorter. But enough of that, on with the game. If you have the game up and running, report in. If you are having trouble with anything, let us know about that as well.

Fright is from Lesta Studios, which is headquartered in St. Petersburg, Russia. It is one of two casual games the company has produced. Its forte seems to be action games, but Fright will not dissapoint.

The game makes extensive use, by casual standards, of FMV. And it is done very well. The only evidence that this was produced in a non-English speaking country is the lack of syncing of the FMV with the voice acting. It’s not off-putting, but it is noticable.

There is a collectable. Essentially you will find $1 bills scattered throughout the game. They are stuck in mailboxes, tacked to posts, found next to a snake hole, basically everywhere. I don’t know whether this appears in the SE version of the game, if that is what you are playing. But, from my point of view, it is only a way to keep score. I.e. “I found 53, and you only found 47! Nya Nya!” These dollars can actually be used to buy stuff in the company store as part of the Bonus material. But you’ve got to ask yourself if you really need to worry if you have enough money to buy wallpaper? My guess is that the answer is no, so collect them if you want. If you ignore them it will not prevent you from playing the Bonus Game, which is the real reason for getting the CE.

We will be playing Fright in seven sections, six for the basic game and one for the bonus. Most sections will take approximately an hour. So, minus the endgame discussion, the playthrough should last about two weeks.

We will start playing on Monday, 28 March. (Does anyone notice that I have modified my dates to fit European convention? Since I think there are only three of us residing in the US, I thought I would do so even as I struggle to not type something more familiar.)

Start with the intro. Play through the puzzles until there is a blackout scene, and you arrive here. 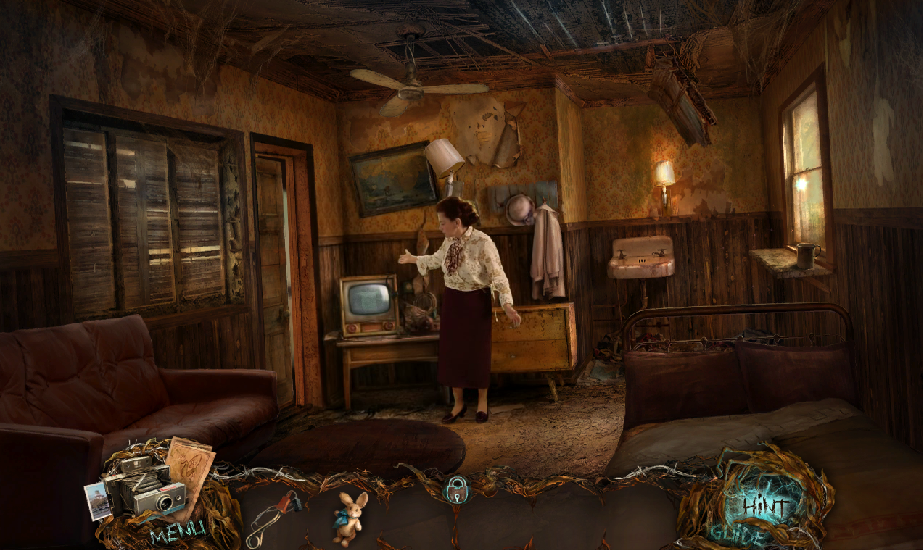 Stop! I will post the next stopping point Tuesday night.

Side note for those of you that like to take screenshots. This game is not screenshot friendly. If you want to take a screenshot, go to game’s Menu, select Options and exit full-screen to Windows mode, and take your screenshot from there. Much easier.

This is a really interesting game. Just trying to figure out what is going on is a challenge. I hope you enjoy it as much as I do.

I’ve got the game running and have played through the introduction. I’m trying it on my laptop this time (I played the game before when it first released). I’ll get a bit further in later on during the weekend.

SE version installed, and I have also played a little part of it.
(Tested the Demo version before voting for it.)

I know you recommended the CE version, but I got the SE for less than a quarter of the price for the CE, and I could never resist a good deal.

I’ve not checked, but I’m guessing the CE bonus game can be watched on YouTube.

Thanks TimovieMan for pinning the thread.

As all of you start play on Monday, look for some inconsistencies. I’m not talking about mechanical glitches, but rather some oddities. Like something happening that seems to be totally contradicted by something that happens later.

I reached the stopping point, this time playing the CE. The game is deliciously creepy and I love the dilapidated decor. I am a little confused as to how I got to the room I am in though. And I stopped picking up the money because the popup window was too intrusive.

I hadn’t thought of it, but this might be a relatively short chapter for some of you who played the demo before buying the game. If the end of the demo is where you are starting, you’re probably cutting the episode’s gameplay in half.

That glitch aside, I’m still planning on two days/episode.

I didn’t know you guys have casual game community playthroughs too… Maybe I can join in someday.  Anyway, I did record a playthrough of the game including the bonus chapter a while back…  So if you only have the SE, you can watch my lets play on youtube.
Here is the playlist: https://www.youtube.com/playlist?list=PLv_2SQLNWWxarHmSiS6XdItbsepZrsw-V

Has anyone participating in the CPT started playing?
One of the things I like about this game is how you can make the picture full screen, without the controls covering anything up.
Unfortunately, as soon as I try to use inventory, all the controls reappear around the edges of the screen instead of just the inventory.

I am unsure of who the old lady is, or what her relationship is to the guy who answered the bell in the hotel office and refused to give you a room.

Will there ever be an explanation of why the TV works when it’s not plugged in?

I’ve reached the stopping point. Although I played this game when it first released, I’ve forgotten a lot. It has a delightfully weird atmosphere, doesn’t it?

I like the way the hand stretches out to reveal the map at the beginning.

Playing on a laptop increases the difficulty because it’s surprisingly hard to see things.

123pazu—thanks for the link. I enjoy your Let’s Plays!

Crabapple—as I recall, just about everything odd DOES get explained. I don’t remember what the actual cause of the TV phenomenon is, though.

So for the previous Casual Playthrough (Beyond: Light Advent) we were in the fifties or sixties in rural America. And we haven’t moved that far afield in terms of place (a bit east to Kansas) or time (a little further into the sixties perhaps?) for this Playthrough.

I’ve just reached the stopping point now. I’m really loving the FMV aspect, the creepy atmosphere & have enjoyed the couple of puzzles I’ve done so far i.e. the interactive HO screen that comes to life from the photo & the child’s toy box.

There seems to be a few inconsistencies where you get info before you should 1 example being if you try to move away from the car stuck on the bridge you’ll learn that there’s a woman & baby in the car before you’ve looked!

I’m looking forward to playing more of the game & am playing the CE (as I had a couple of credits to spend at BFG!)

For those of you that haven’t completed the first chapter yet, fear not. Even though the second chapter starts on Wednesday, it’s only about 45 minutes long, so you should be able to catch up and complete it before we start chapter 3 on Friday.

One of the inconsistencies I was talking about was you getting reprimanded by the Motel owner, and being told there are no rooms available. Then, at the end of this chapter everyone, except apparently you has a room.

Chapter 2 ends when you reach this scene 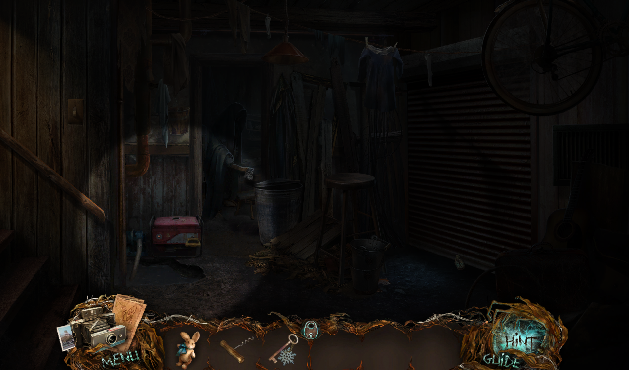 specifically stop when you enter the basement.

I’ll post the chapter 3 end point on Thursday evening. There is another maddening inconsistency just before you enter the basement. Although to be fair, this kind of thing happens all the time in regular adventures.

One of the inconsistencies I was talking about was you getting reprimanded by the Motel owner, and being told there are no rooms available. Then, at the end of this chapter everyone, except apparently you has a room.

Maybe I missed something but I finished this part being aware of only the one woman having a room & perhaps it was pre-arranged? I didn’t find any clues as to the motel not being full?

Chapter 2 starts with exploration of the guest rooms and the immediate area.

I haven’t started it yet.  I forgot that the system requirements don’t work with my this older iMac.  As soon as I get my new one up and running, I’ll catch up.

Maybe I missed something but I finished this part being aware of only the one woman having a room & perhaps it was pre-arranged? I didn’t find any clues as to the motel not being full?

I thought the old lady got rooms for everyone after the lady with the baby was rescued.
I thought the old lady was the one who actually owned the motel, and the nasty guy that comes out when you ring the bell in the office was either a family member or was only pretending to run the motel because he wanted to get rid of you as soon as possible. Of course I could be wrong, but that’s how I interpreted it—that the old lady lives there and had just come home from a shopping trip or something.