STYGIAN: Reign of The Old Ones. Lovecraftian computer RPG.

We are a gaming studio called Cultic Games. As a team we’re developing a Lovecraft themed computer RPG called “Stygian: Reign of the Old Ones”. We hope that rpg admirers like you (and like us

) can get interested in our game. You can find some screenshots and info below. We want to create the best possible experience with your feedback. Let’s be in touch! 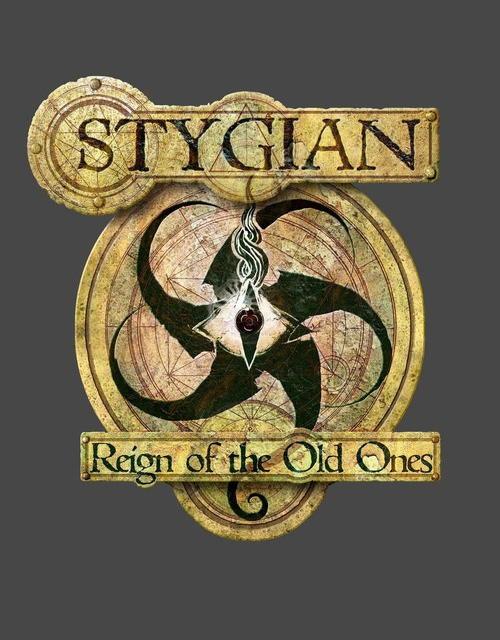 “Stygian: Reign of the Old Ones” is a supernatural horror roleplaying video game which takes place in the strange worlds of Howard Philips Lovecraft. Stygian will draw the player into a bleak journey from a ruined Arkham to the very depths of the Abyss.

The narrative of the game is strongly connected to the works of H. P. Lovecraft. In your quest, you’ll use the haunted violin of Erich Zann to lure a fiendish deity and convince the poor wretched protogonist of “The Outsider” to join your party among many others.The heavy burden of fighting a desperate battle with forces beyond recognition will haunt you to the end of the game.

Physical combat will be scarce and difficult, spellcasting will have deep and dangerous consequences, sanity loss will leave its marks on characters as mental illnesses and sometimes the best solution will be running away from the terrors that lurk in the night. Stygian embraces the original themes of gothic, pulp and weird fiction, incorporating them into the computer roleplaying genre, promising a fresh (or putrid from another perspective) breath of air for roleplaying fans. 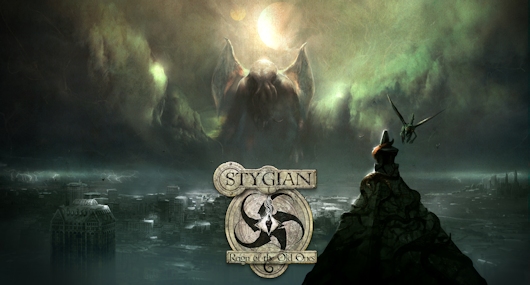 Your former life was in bliss of ignorance until you’ve awakened to the darkness waiting to devour our very existence on the doorstep of our fragile dimension. Something terrible left its eons old slumber and the reality as we know it, collapsed. The town of Arkham was pulled to somewhere not from this world and its residents are in the shadow of absolute terror. As a survivor of the catastrophe you should investigate the strange occurrences in the city and survive the rising darkness physically and mentally, if possible… 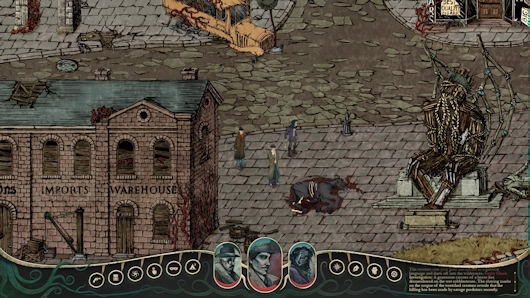 • A hand drawn 2D world which reflects the mood of Lovecraft and the pulp era of horror.
• Quests and storylines which capture the iconic themes of Lovecraft. Take part in your favorite horror stories and shape their outcome according to your role-playing style.
• Weirdest of the companions will accompany you in your accursed journey. Lonely antediluvian of “The Outsider”, a dead WW1 soldier reanimated in the hands of “Herbert West”, a psychic narcissistic cat from Ulthar and more will be among your eccentric cast of companions.
• Sanity and the mental state of the character will have influence on the dialog options. Mental conditions create benefits as well as hindrances. Sometimes being mad in a mad world helps.
• Belief Systems determine what the characters find comfort in and regenerate lost sanity alongside providing unique role-playing opportunities. A rational character gains sanity after completing a research on a mythos creature while a divine one gains sanity after converting a lost soul to the path of God.
• A unique spell system which sometimes takes more than what it gives. The black magic of Stygian is very potent but will cost you your mind, health and sometimes your very soul. Being a master of the true occult is not like flinging colorful missiles from your finger tips.
• Turn based strategic combat in beautiful 2D with “Heroes of Might and Magic” like perspective.
• 7 different backgrounds with completely unique prologue stories and specialities to breathe life into the Lovecraftian archetypes.
• The struggle is not for saving the world, that battle is lost already. Track your personal goal for salvation or vendetta in a doomed world. 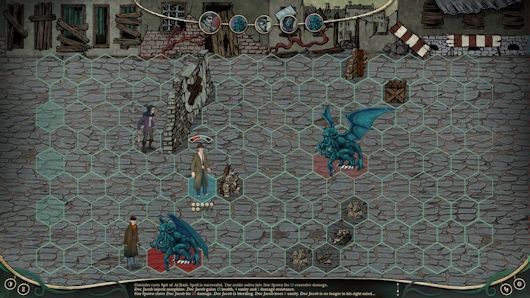 Acolyte of the unfathomable. Do you dare enter its’ den? 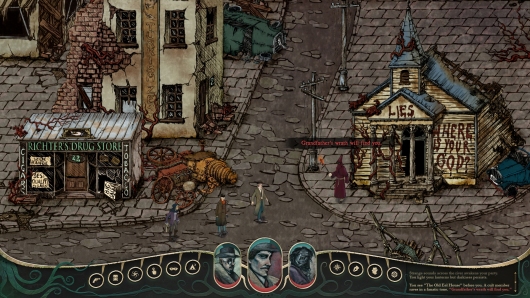 Here is the Pickman Ghoul from the Stygian bestiary. 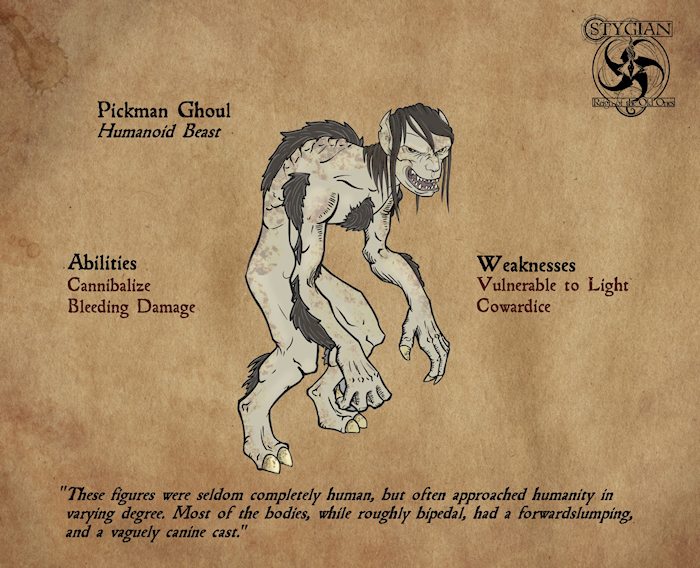 Beware the Esoteric Order of Dagon!!! 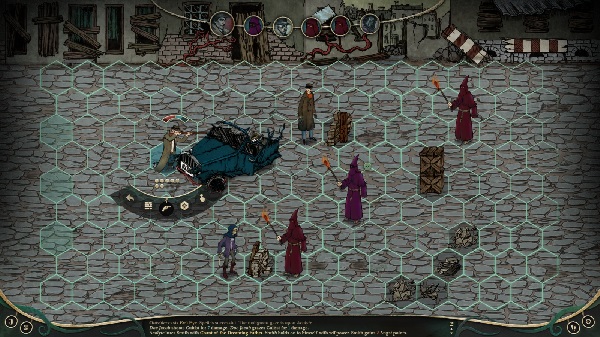 Enjoy the “Investigator” Archetype, one among 7 different archetypes which can be chosen by our players.

*Prologue Story: The character is an ex-cop who currently works as a private investigator. The latest case of a missing child turned out to be much more complicated than a common kidnapping.

*Investigation, Firearms and Psychology skills will be able to reach the maximum level.

*An Investigator is more likely to find hidden items and will have unique dialog options with NPC’s from the same background. 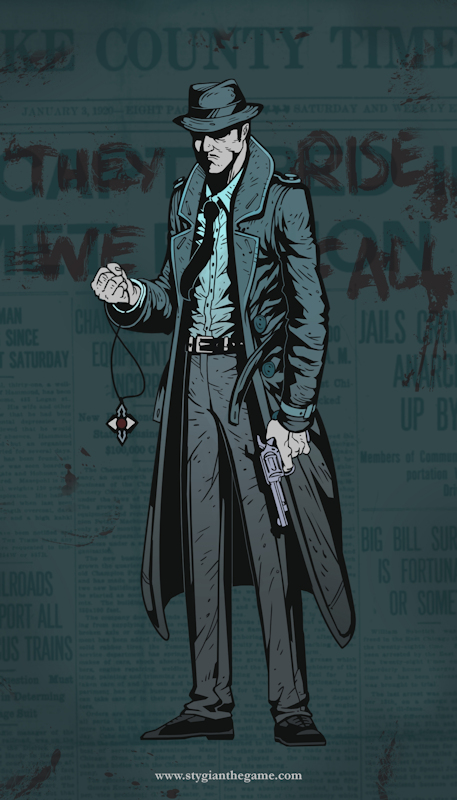 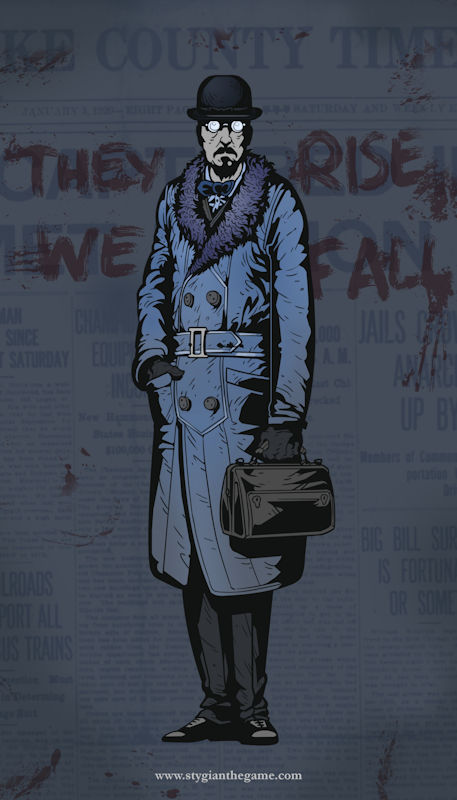 Prologue Story: The character was a researcher at Miskatonic University. When he was sent to a remote expedition, he couldn’t be aware of the doom waiting him patiently under the frigid wastes.

Science, psychology and medicine skills will be able to reach the maximum level.

A character with academic background will benefit more from books and have unique dialog options with npc’s from the same background. 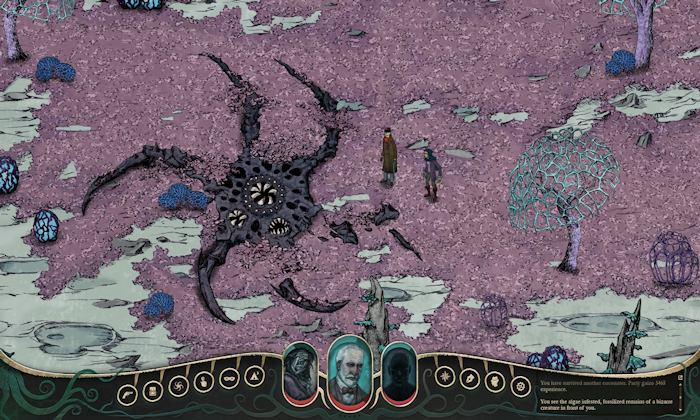 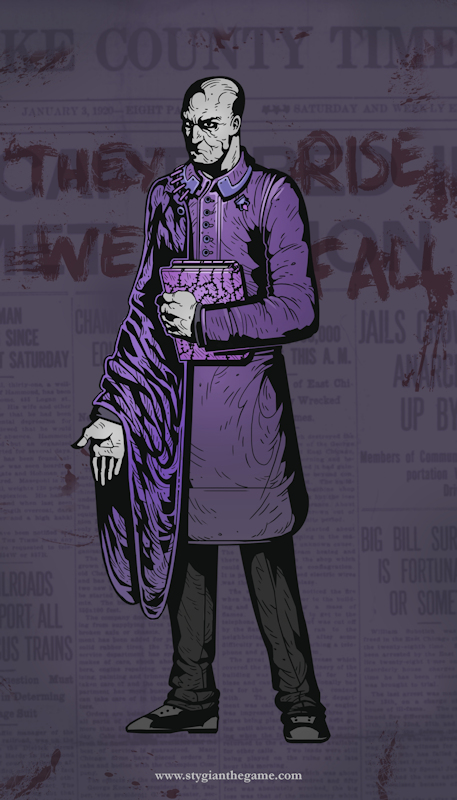 *Prologue: The character is a member of a hidden order. The backing of the order made the life easier so far, but the initiation rite to the inner circle may involve some complications…
*Occult, investigation and medicine skills will be able to reach the maximum level.
*A player character with a Secret Society background is less likely to suffer from the negative effects and costs of spells and have unique dialog options with npcs from the same background.

Our next archetype is the “Aristocrat”. 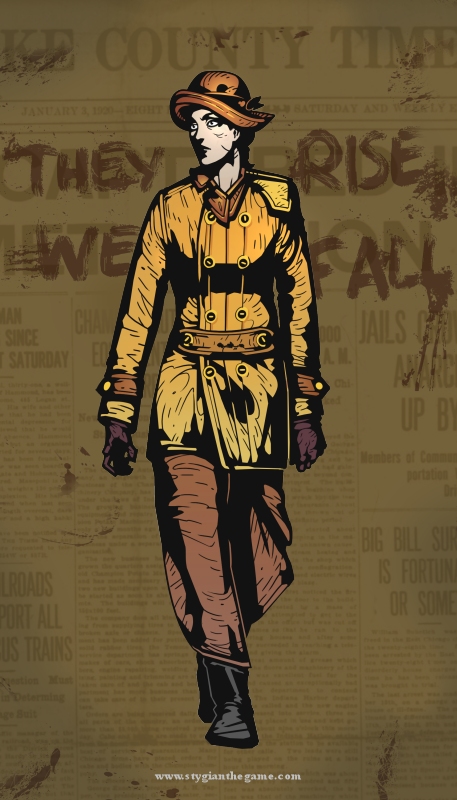 *The character is the sole remnant of a noble family. The return to the family manor after the loss of the mother may not bring pleasant memories.

*Finance, speechcraft and occult skills will be able to reach the maximum level.

*A character with aristocracy background starts the game with a special henchman and have unique dialog options with npc’s from the same background.

“You will feel despair.”

Survival against Mi-go on a distant moon. Will the dark arts help you? 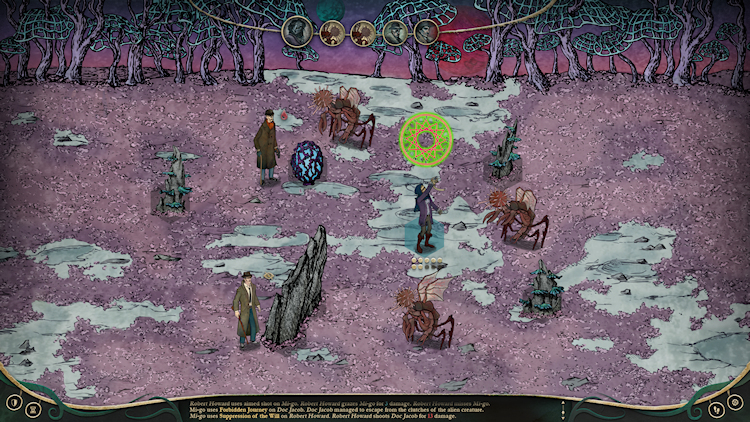 Nameless Soldier will be among the most eccentric of your companions. He is a lost soul who was re-animated at the hands of Dr. Herbert West during the World War I. Nameless Soldier is doomed to re-live the hell of the front-lines in his trapped mind. He is proficient with firearms and more enduring than the most physically advanced player characters. Sadly, he has a tendency to re-live his memories and lose control of himself in battle. We’d like to share some of our influences on Stygian. These books and games are what we call designer protein. We hope you got a taste for an elegant turkish carpet as well.

Note: After the decision of creating Stygian, no designer opened the cover of CoC role playing game in order to separate our vision from Chaosium’s. The book is over there just to show our respect. Stygian project travels back to the roots and is solely influenced by the works of H.P.L. himself when it comes to Mythos territory. 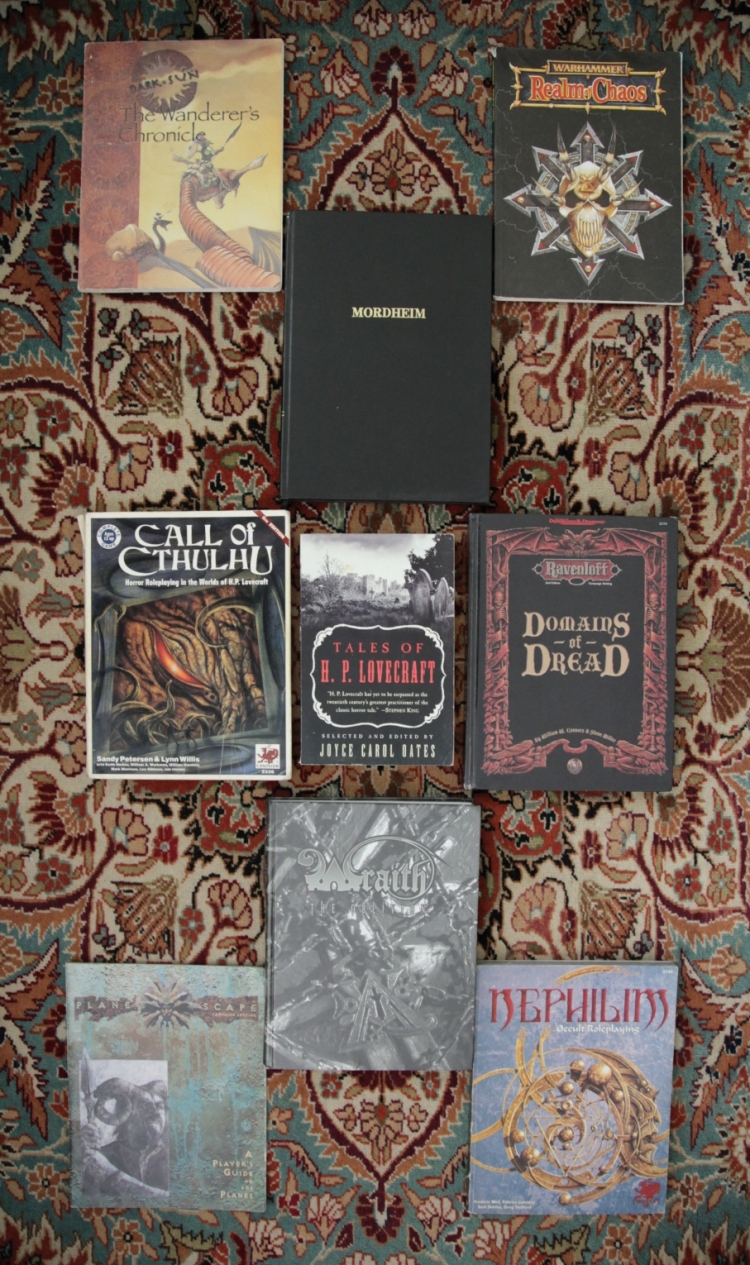 *The character is a hired gun for a mafia boss. The last stop on a long night of collecting tribute was a nightclub which is known for its patrons’ rather peculiar taste for entertainment.
*Subterfuge, firearms and stealth skills will be able to reach the maximum level.
*A character with crime background gains more money from stealing and have unique dialogue options with NPCs from the same background. 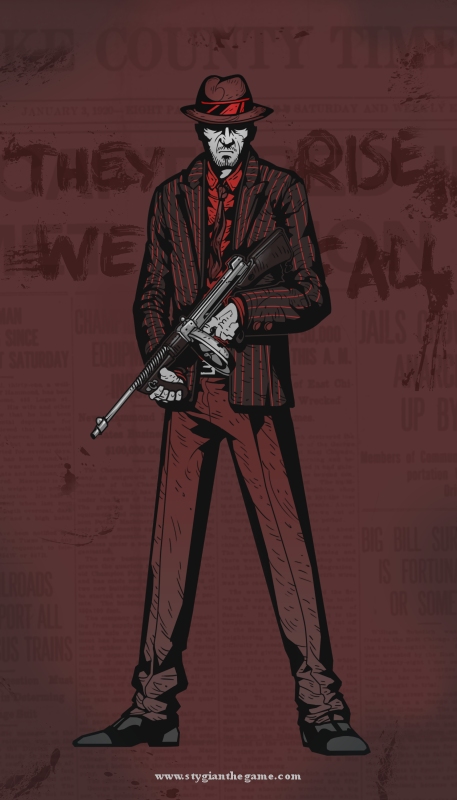 A screenshot from Nithon adventuring scene. 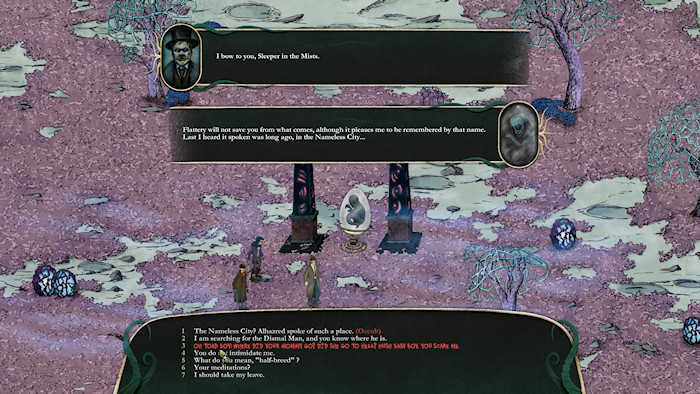 A message from the headquarters: 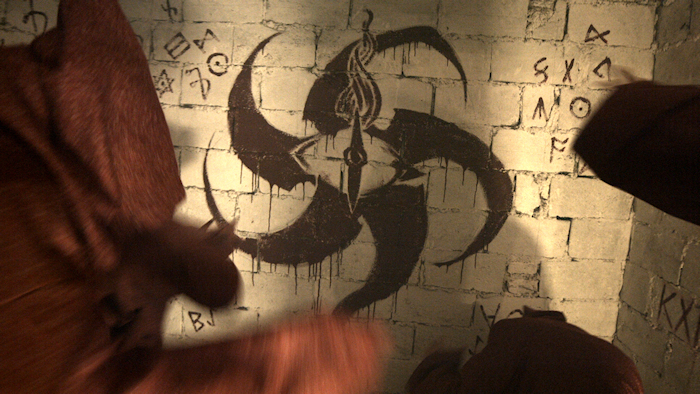 As a team we decided to spend a few more days on our Kickstarter video. We’re really proud of the work we’ve done so far and like to present it to you in the best possible form. The video is in post production right now and days away from publishing. Considering the fact that the Kicktarter approval periods vary between different projects, we decided to remove the counter from our page. Stygian will be on Steam Greenlight with a gameplay trailer soon and will be on Kickstarter shortly after. We hope you’ll be surprised about our Kickstarter video. Without giving any spoilers, let’s just say that the Team Cultic deserved its name

Thank you for your understanding.

That is not dead which can eternal be played.”

We are on Steam Greenlight! Help us rise and spread the doom! 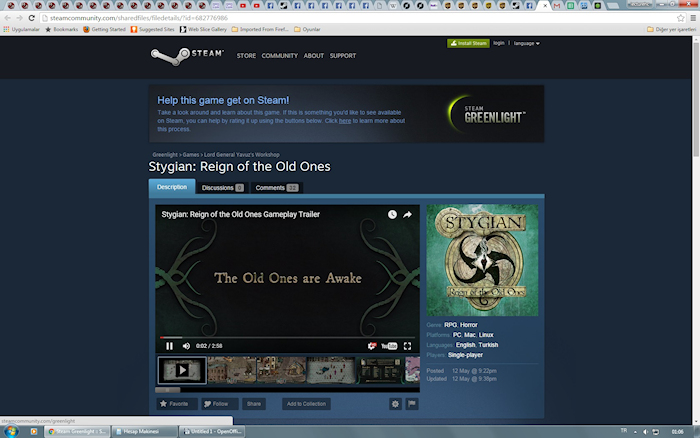 We’d like to introduce our newest team member to you!

We are proud to say that Scott Hamm, contributor to Iron Tower Studio (Age of Decadence, Dead State) will be joining Team Cultic as a multidisciplinary specialist. Some of you may remember him from “Cyclopean”, another Lovecraftian RPG project which was cancelled a couple of years ago. The dream (Or perhaps the nightmare) continues with Stygian. Welcome Scott!

You can find his interview with GameBanshee about Cyclopean below:
http://www.gamebanshee.com/interviews/111747-cyclopean-interview.html

*The character took part as a soldier in a secret government assault to a strange coastal town. The enemy was not entirely human.
*Melee, firearms and survival skills will be able to reach the maximum level.
*A character with military background is less likely to make critical mistakes in combat and have unique dialog options with npc’s from the same background. 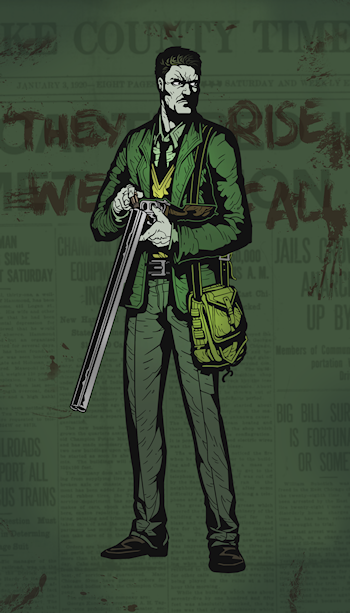 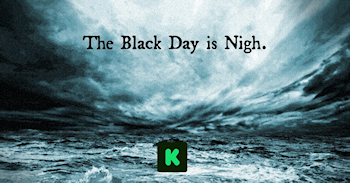 Stygian is on Kickstarter!
Let’s make this happen together!

We’re proud to introduce a game system unique to our game and it is called ANGST.

In Stygian, choosing the moral or the mutually beneficial path is sometimes the toughest. You may want to rescue a friend from the clutches of the Cult but trying that may mean suicide or in another case you’ll lose the poor kid who follows you blindly into the oblivion. Stygian rarely offers safe passages or happy endings. From the beginning, one of our goals was exploring the concepts of loss and sacrifice. On your journey you’ll be losing things one by one, your comrades, your sanity and your moral values. 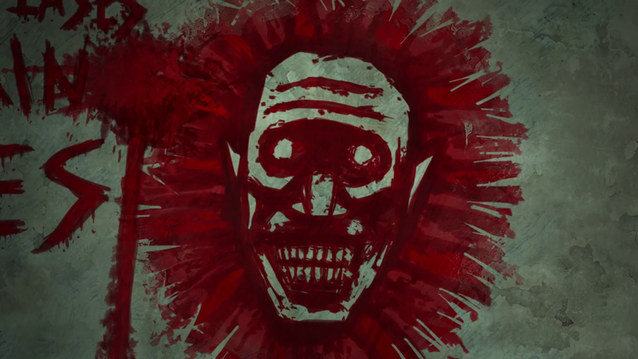 This reflects to the mechanics as “ANGST” system in Stygian. Your pain and despair collects like a sort of black experience throughout the game and with ANGST you gain access to unique perks like Masochism which allows you to gain small amounts of Sanity whenever you receive a certain amount of damage or Ill-tempered which allows you to gain more ANGST whenever you mistreat a friendly character in a dialogue.

You’ll also be collecting small amounts of ANGST whenever you take a critical hit, develop a mental condition or bleed for a certain period of time etc. ANGST opens new doors to some very interesting choices for the player to consider.

What expansion setting would you like us to implement into the main Stygian campaign if we meet our stretch goals? Dunwich or Dreamlands?