AG Community Playthrough #38: Touché: The Adventures of the Fifth Musketeer 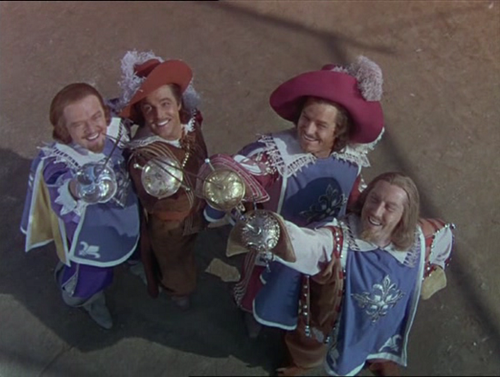 he time is the end of the sixteenth century, renowned for its culture, art and almost total disregard for personal hygiene. This is a time when a man’s worth is judged by the speed of his sword and the size of his moustache. A time when men were men and women were really, really bored.

Welcome, dear fellow musketeers to the community playthrough of Touché: The Adventures of the Fifth Musketeer, a game released in 1995 by Clipper Software and published by U.S. Gold. As the name suggests, the game borrows the setting from Alexandre Dumas’ classic, but is neither a retelling nor a continuation, but more of a spin-off set in the same world (for example, d’Artagnan is an officer in your new garrison). The story follows the exploits of Geoffroi Le Brun, ensign in His Majesty’s musketeers, as soon as he arrives in the French city of Rouen, a new posting in his musketeering duty. Rouen will serve as a headquarter in our bold adventure, but we’ll also visit other cities around France (Amiens, Paris…), and even meet the invading “English pigs”! 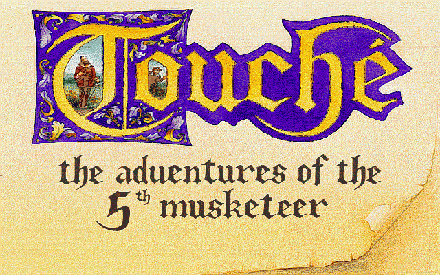 About the game:
What kind of game to expect? Touché is a clear tribute to early 90s comedy adventures, most noticeably Monkey Island of LucasArts fame - the hero is a naive, ambitious “I want to be a musketeer!” sort of fella, but you’ll also pretty quickly after the game starts get a sidekick as well (and a mission to fulfill the dying nobleman’s wish). It needs to be said that the game is marred by some typical “small budget games” issues - for example, it’s obvious they had to reuse a lot of character models (every soldiers are a complete lookalikes), and the execution is not “epic” as seen in similar LucasArts or Sierra titles at the time. Still, Touché is not without its aces up the sleeve - there’re a lot of challenges awaiting on your quest, the story is involving just like the book, and while not “outrageously” funny, you can be sure that the game will pull a chuckle or two for anyone remotely interested in these sort of games.

As for the interface, it’s sort of a precursor to “Full Throttle” and Monkey Island 3 type of “coin cursor”, with a twist - it’s unique verbs/actions are context sensitive, and you can never be sure what sort of actions you can take on a certain hot-spot. As for the hot-spots, it’s all “ol’-school” - there’s no highlighter, so inspect things closely and pay attention. When it comes to puzzles - expect EVERYTHING you’ve ever seen in an inventory type of puzzles + some more. 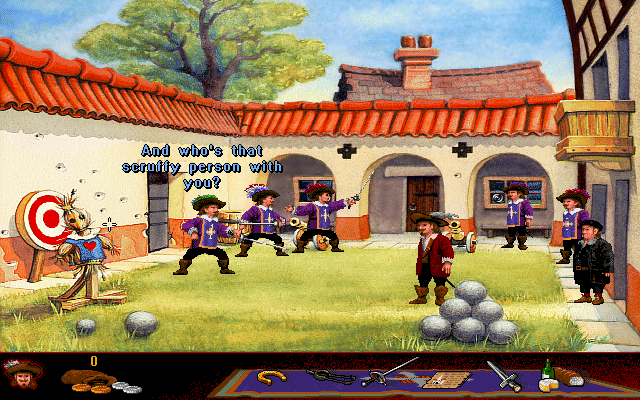 Where to get it, will it work?:
The game is supported both by the DOSBox and ScummVM, and the author of the game, Graham Lilley has given a link to CD copy to all participants in this thread. PM me for the link! 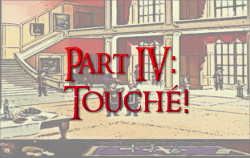 Additional notes: The game features music from a “living C64 legend” Ben Daglish, but perhaps you’ll be interested (for example, if you already played the game) in the Enhanced Soundtrack (I recommended it even to newcomers - it maintains the great Daglish’s tunes, only adding new instruments).

That’s it! Swash your buckle, the glory awaits you!!! 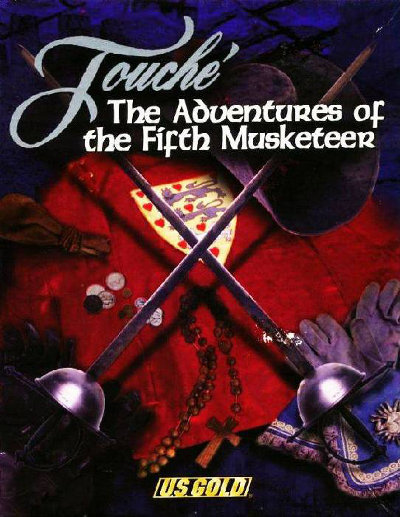 Touche never left my win95 computer. Ready when you are.

Ready when you are.

(would you believe only a few years ago when playthroughs were “done for”, that we’re having 3 playthroughs at the same moment?

Mine is installed on my iMac and ready to play in ScummVM.

I’d like to tell an anecdote right at the beginning - my first contact with the game came from a local game shop, and I entered it one day after the school. Unfortunately, even though I had a general idea what the game is about, I had no idea how to pronounce “Touché” (I must have heard the expression countless times in movies, as I always liked the swashbuckling adventures on screen, but it just slipped my mind). The shop was a small shop organized in a way that the clerk was standing in front, and all games behind, with new titles close by. I desperately wanted to ask for a game, but I knew I will make a shame of myself if I ask for “Touch-e” (sort of like Touchy) as it was the only idea in my head how to pronounce it (and I knew it wasn’t right). It also didn’t help that I had a crush in a female clerk, and I knew I’d stand no chance with her if she learns about my miserable knowledge of foreign languages. The strategy of “I want THAT game, you see, that one, starting with T…” was out of question because she’d see straight through it. Luckily, a friend of mine (with a better knowledge of foreign fencing exclamations) also just entered the shop and saw my suffering. He smiled and said - Ah… so you want - Touché!

I am really looking forward to play it, but I didn’t vote for it because I had no copy. If the game designer will share a link with us, I will gladly join the playthrough

Stickied. Have fun, everyone.

Ditto SoccerDude. If a legit download link appears, you can probably count me in.

I’ve just got the official CD copy from Graham Lilley! Anyone interested in joining the playthrough should PM me to obtain the link. (it’s on the http://clippersoftware.co.uk/ server). 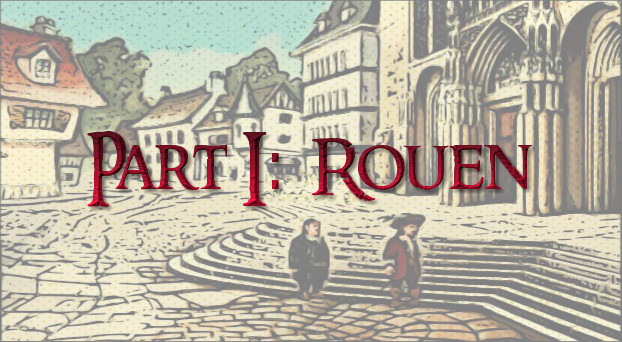 The first part of the playthrough will be centered in Rouen - you need to apply for your new duty. You should stop playing once you reach this map and you’re able to travel around France. I’ll give it 5 days until Sunday to do so.

Wow! Touché! Almost 20 years passed since I played this! It was the second adventure game I played (the first was Flight of the Amazon Queen) and it helped cement my love for adventure games (until then I had mostly only played action games, with the occasional strategy/simulation game).

Like rtrooney, I would love to give this one a try, if a legit download link appears. Anyone knows why this isn’t being sold anywhere?

A quick note since some of you are still wondering - the author of the game, Graham Lilley has given a free legit download link for the CD copy of the game! As he promised it to the participants for the sake of this playthrough, I wont be giving link publicly, but all you have to do is send me a PM (or ask for it in this thread)!

I downloaded the zip copy from the PM. Anyone have step-by-step instructions for setting it up on DOSbox?

I downloaded the zip copy from the PM. Anyone have step-by-step instructions for setting it up on DOSbox?

Have you tried using Scummvm? (there’s no need to install the game, just load and play)

Ooh! Very nice. The voice acting so far is also stellar. Back in the 90s I played the floppy version, so no voices.