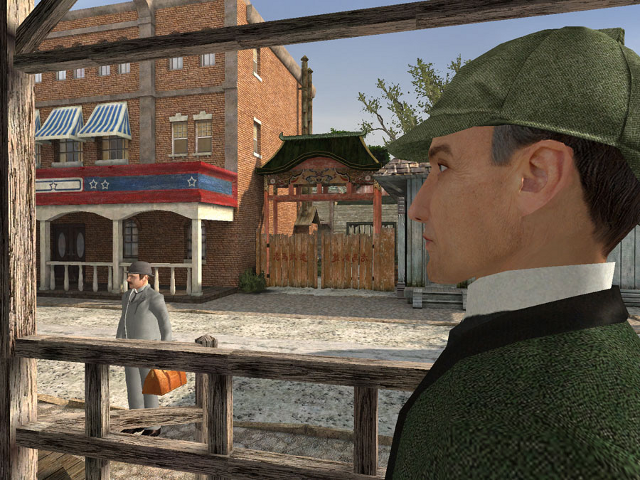 So, Holmes and Watson in Louisiana… What does this have to do with Lovecraft again? Well, nothing—and that’s the point. The Awakened was never as good as when it forgot about its cheesy, extremely generic(*) horror premise and tried to do something else. So I could have posted a scene like this, but I prefer posting something from my favourite part of the game, the theme of the week be damned.

(*) Seriously, if the game’s designers have actually ever read anything by Lovecraft, it really doesn’t show.

(*) Seriously, if the game’s designers have actually ever read anything by Lovecraft, it really doesn’t show.

Did the game claim to be influenced by Lovecraft?

Did the game claim to be influenced by Lovecraft?

Everything with Cthulhu in it, is influenced by Lovecraft…

Oh right, I didn’t know Cthulhu was in it! It’s been a while since I’ve played it.

Oh right, I didn’t know Cthulhu was in it!

And I rest my case.

The Awakened, especially the Remastered Version (not that much because of 3rd-person, but rather of useful diary/hints) is a very solid game. Not perfect, mainly because it suffers of the more/less the same problems that haunt Frogwares’ vision of Sherlock Holmes: quite sterile atmosphere at times, and uneven quality throughout the game, which may be the reason why some players will give up before acknowledging good things that game has to offer.

The plot is not bad, and I didn’t really care if Cthulhu elements were done right - it’s a Sherlock Holmes game after all. What surprised me the most is change of pace during the “American” part of the game, and puzzles. There’s a bunch of “thinking outside the box” problems, and it was one of the rare recent instances where I enjoyed to be stuck at the puzzle for several days, and write down things in my notebook.

The plot kinda stretches near the end and the finale is so-so, but I still think it’s one of the better mystery games in last couple of years, but remember that 3rd-person camera view is useless, so you’ll need all your First-person shooters experience. Also, while I’m yet to play “Lupin”, what worries me in light of the newest installment, is that Frogwares haven’t kept the same level of quality in “Ripper” when it comes to puzzles. They did improve some of the narrative flaw though, and it’s obvious they worked hard on their graphics engine, so let’s hope for the best.