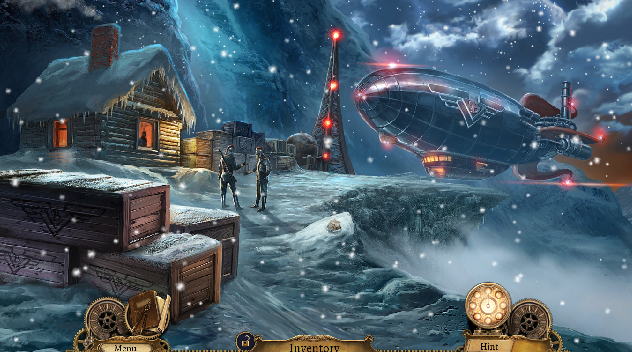 I can’t remember whether it was in an AGSotD post or somewhere else, but someone, I think it was TimovieMan posed the question “Why do so many casual games look similar?” My answer was that I didn’t think they did. Somebody else said it was because many developers are using the same engine. That engine, the Spark Game Engine, was created by the same people who developed the game Clockwork Tales - Of Glass and Ink. (Shown in the above screenshot.) That company is Artifex-Mundi, who has created a number of really good casual games.

Most prominent among them is one we played in a CCPT, Enigmatis - Mists of Ravenswood, which was the first game created using the Spark Game Engine. All that said, Glass and Ink was developed slightly before Mists, and the difference in styles is quite obvious. Both were released in 2013.

The above game is probably one of the better “steam-punk” games I’ve played. Certainly right up there with Depths of Betrayal.

I would generally place the game somewhere in the 1915 -1920 era. There is a war going on, and the setting is somewhere in the Germany/Austria vicinity. The actual location is fictional, as you would expect. A warlord/mechanical engineer (nice combination,) is attempting to turn the tide of battle in favor of his side. While he does have human minions, the primary weapons at his disposal are mechanical. Hence the steam-punk atmosphere.

It’s a fun game. As with many Artifex-Mundi games, most of the hidden object scenes involve finding various parts in order to create a whole device. While this kind of scene, when used sparingly, and with other HO types, adds variety to a game, it, too, can become tiresome when used frequently. That might be the case here.

It’s been awhile since I played Clockwork Tales. As I recall, it had some tasty puzzles and bizarre machinery. My favorite part was flying on the zeppelin.