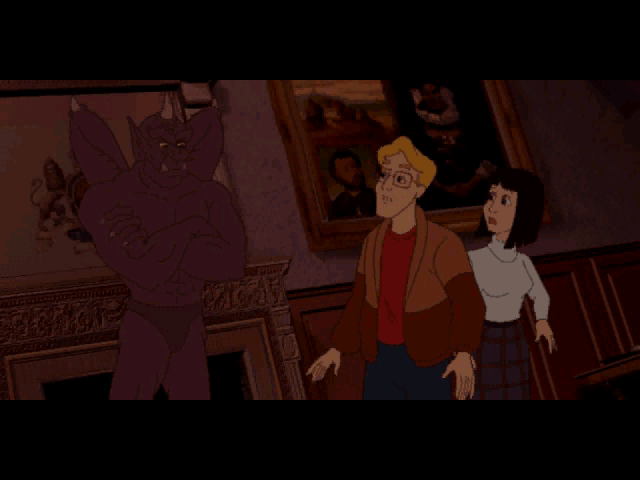 I’ve only played this game once, and I remember it feeling very messy and confusing. And after replaying a few minutes of it to grab this screenshot, I feel even more confused.

Seriously, I can’t think of a similar case with a hefty amount of cartoon cutscenes, whereas the game itself is rather a typical pre-rendered 1st-Person. If you put together all the animated videos from the game, you’d get more than 40 minutes of animation.

I’ve played it a few years ago, but lost my save games and was lazy to continue it, but I will. I don’t know if the critics are right that it’s worst in the “trilogy” (never played the other two), but I’ve enjoyed it. If I’m right, it has one of the earliest “UHS-like” hint systems, similar like the one in Keepsake, and more difficulty levels.

The biggest problem for me was somewhat confused orientation - going left or right is often a 180° turn, so you’d get at the same spot - combined with the fact that all the doors look alike would result in confusion until you get to know the house well. Another downside is that, like The Space Bar, the game doesn’t have subtitles which makes things harder as all that is said contain hints. The puzzles are varied, with an interesting quiz section at doors, and the graphics hold up pretty well.

Finally, the game subtly features the Scottish-folklore not often seen in games.

Clandestiny is one of the games I have played and it’s a mixed bag.

I was hooked by the cartoony graphics (yes, I have a thing for those), but that’s about all. The plot is almost nonexistent, you traipse through a castle you inherited, trying to open the doors and go to more doors. For me it was easier to open a door (by solving some riddle) then to find a new one to open (navigation in that castle is quite hard).

There are three levels of difficulty and I had chosen the easiest when I first played it, but never had the will to replay the game with harder setting.

I hated the developers for not including the subtitles, and you just need the subtitles in Clandestiny since most of the game characters have strong Scottish accents.

On the plus side you’ll learn a couple of things about Scotish folklore and have some fun with a nice range of logical puzzles.

Many years ago I had yearned to play Clandestiny, hoping it was a bit like Broken Sword or something like that, but it wasn’t and at the end of the day it was a disappointment.

Edit: Hehe, Diego and I share a lot of opinions about this game.

I’ve played it a few years ago, but lost my save games and was lazy to continue it

That’s so typical of you!

That’s exactly how I remember it!

The reason I was looking forward to this so much was that when I was a kid the 7th guest and 11th hour used to scare the bejeesus out of me. Clandestiny looked like something that I could play without cowering behind the sofa

alas, I never saw it in any shops and thusly never got round to playing it

Like ^^Dusty and ^dave here, I saw the trailer for Clandestiny that came with my copy of The 11th Hour. Looked really interesting (especially with the then-great-looking visuals). I never found a copy of it back then, and when I got an internet connection I read nothing but bad reviews, so I didn’t bother looking for a copy…

It’s one of many titles on my “meh”-list.