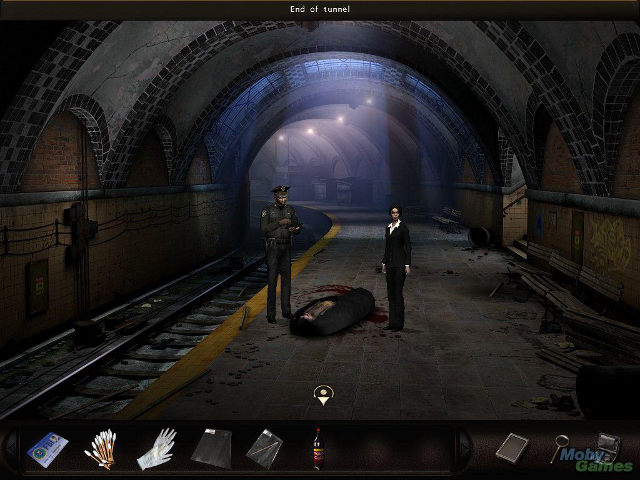 I’ve never played the Art of Murder games (this is from the 1st one, FBI Confidential), and I would probably have forgotten about their existence if it were not for Jack’s review of the series’ casual instalments which started with “Oh, how the mediocre have fallen.” — which I remembered because it was very cruel and very funny. But was it accurate?

Truth to be told, both Art of Murder and Chronicles of Mystery series always had a “casual” vibe to it, and it didn’t come as a surprise when City Interactive embarked into the casual territory. For instance, much bigger surprise to me was Kheops’ endeavor.

Art of Murder games are sort of games in which I could find 1000 objects, constantly saying to myself: if only this was slightly better done, if only that was slightly better done… yet I’ve managed to “like” them in a way. They’re simple and honest games, not hiding the fact that most things in it are “cliche”. Also, the third one in the series might not be the “best”, but it’s certainly the longest and most “full-fledged” adventure of the bunch.

i dont know anyone would agree that the third part (Tree of Life) is far a away from this casual description, it even has this beam puzzle that stumped everyone who played the game , plus dealing with the mainframe (interface) at the head Quarter to scan photo and Fingerprints and so on…

I’ve never played the Art of Murder games (this is from the 1st one, FBI Confidential), and I would probably have forgotten about their existence if it were not for Jack’s review of the series’ casual instalments which started with “Oh, how the mediocre have fallen.” — which I remembered because it was very cruel and very funny. But was it accurate?

I’ve played all of the 3 AOM adventure games which I really enjoyed for the comparatively realistic locations, rendering of characters & the stories set in the modern world. The games are not perhaps ‘ground breaking’ or special enough for a lot of players but I found them to be good solid adventures. The developer/publisher City Interactive also produced 2 Chronicles of Mystery adventures.

Sadly they continued both series by producing games for the Casual market! I don’t about the others but disappointed at the AOM adventure games not being continued bought the next ‘casual’ Art of Murder: The Secret Files. It truly is one of the worst casual adventures I’ve ever played & one of the few bought I didn’t finish. I don’t know whether CI improved with subsequent casual games for AOM or COM as I’d rather see the series’ continued as ‘proper’ adventures!!!

The first couple of games are pretty mediocre, but still fun.

I really don’t like the AoM games. Mainly because they are so incredibly unrealistic I just can’t get into them. In FBI Conf the main character, an FBI agent forgets to put on gloves while processing a crime scene (which by the way isn’t even art of an FBI agent’s job description) and in hunt for the Puppeteer this same FBI agent travel Europe without there ever being given a logical explanation of how she can do that. I mean she’s FBI not Interpol! And that’s just two of the most blatant examples of just how little research the developers did for these games.

The CoM series I like better. The first one is mediocre untill you come to the horrible, horrible ending. (which raises more questions than it answers) The second game: Tree of Life is actually quite decent imo. With a good solid story, very nice visuals and a good high adventure vibe. The characters are all pretty cliché and it’s not really top quality but I rather liked it. Shame they didn’t continue that series.