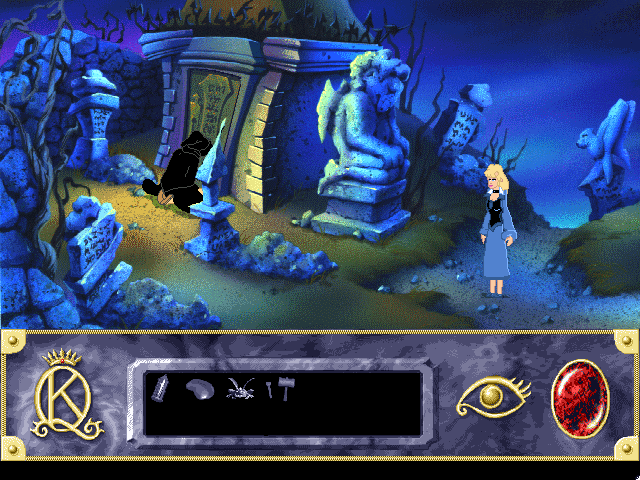 I’m usually among those who defend King’s Quest VII, saying that it’s not as bad as it seems if you give it a chance. But, when preparing this thread, I couldn’t think of a single scene I wanted to revisit, and the few minutes I spent in the game to grab a screenshot were pure torture.

The game looks ugly: the 256 colours lead to graphics full of dithering and the 640x480 resolution looks terrible on current monitors. Whereas in older games it was clear the artist had reworked the picture to make is look as good as possible within the technical limitations of the game, here it’s obvious they just painted the art on paper, scanned it, converted it to [email protected] and shoved it directly into the game. And don’t get me started on the “Disney-quality” animations and their 3 frames per second. Or on that ugly interface block that takes up a third of the screen (why is there a huge nuke button???).

And then there are the two main characters. Who thought that writing them as clichéd and obnoxious was a great idea? In this game, Valanice becomes an old pompous snob with a stick up her arse the size of that crystal tower she used to be locked in. And Rosella, a spoiled brat who badly needs to get smacked and sent to her room. Those two were given personalities that would usually go with antagonists, which is just a stupid choice. I haven’t played any of Lorelei Shannon’s other games (Phantasmagoria 2…), so I don’t know if she’s a terrible writer or if she just screwed up this one time but — ugh.

But the worst is the way the game constantly tries to be cute — and constantly fails. After playing it for 5 minutes, I wanted to kill puppies just to scrub my brain.

Anyway, here’s a scene from KQ7. It’s not interesting, but at that point, with that stupid ghost whining in my ears, hitting the screenshot button and closing the game was all I could do to avoid throwing my computer out of the window. As I said, I usually defend KQ7, so I guess I’m just not in the right mood for it right now. But at least now I get why people can hate it so much.

I pretty much agree with you on all counts. KQ7 is pretty horrible - odd there wasn’t some higher up who during production said wait just a minute, but just okay’d the whole thing. The game is an obvious train wreck.

This one was fairly Difficult and its Length was Very satisfying

i really dont know how do you keeping it everyday, but anyways you are great

and Now You Had finished with KQ’s Series ,Kuru? what are you going to do ?

Next week is Mask of Eternity, then a short break for something special, and then El Revestimiento de Plata: A King’s Quest Telenovela. Then I might do Romancing the Stones, since it’s so different from the monstrosity it’s based on. So that gives me plenty of time to figure what to do on Fridays afterwards.

I don’t remember much about this game, to be honest. Played it once, enjoyed it somewhat. One thing that stands out to me is this musical track - so sad.

Next week is Mask of Eternity, then a short break for something special, and then El Revestimiento de Plata: A King’s Quest Telenovela. Then I might do Romancing the Stones, since it’s so different from the monstrosity it’s based on. So that gives me plenty of time to figure what to do on Fridays afterwards.

Are you saying every day has its own theme?

Are you saying every day has its own theme?

Not every day, but Friday has been King’s Quest day for 7 weeks now. And Wednesday is Fien day.

The Silver Lining Ep.4 Worth mentioning as well.

And Wednesday is Fien day.

I’m looking forward to your next Wednesday pic.

With some trepidation. You’re attaching my name to your selection and I only posted pics from games that I found remarkable in some way. Can’t go wrong with TLE, though.

This one was heavily written and designed by Lorelei Shannon. Enjoyable game with some annoyances. Looks good to me at 640x480. Perhaps a shittier screen resolution appeals to you hipsters out there, but this series has always been about pushing the tech.

I remember really liking this game when I played it in the mid-90s. Too bad that the scene with the giant scorpion is about all I can remember from it now. Plus I never finished it - got stuck somewhere halfway.

Will be replaying this soon, though.

Will be replaying this soon, though.

“Soon” turned out to be eight months later, but I finally replayed this.

I must have gotten stuck near the end of chapter 3 back in the day, because I remember most of the scenery up until that point, yet recognize nothing from afterwards.

Anyway, I remember liking it, and I actually like the game, but unfortunately the first three chapters are by far the best of the game…

The King’s Quest series gets a cartoon overhaul, with streamlined gameplay and an interesting but faltering story.

The seventh installment in the King’s Quest series gives us control over not one but TWO female protagonists. In The Princeless Bride you play half the game as Queen Valanice and the other half as Princess Rosella, alternating between the two after each chapter end. This makes for an interesting concept: both the queen and the princess are hurdled to opposite ends of the same land, and need to work their way towards each other to return home. Add in an evil sorceress who wants to destroy the world, and you have a really good start to this tale.

As usual, Sierra uses the King’s Quest series to showcase their technological advances and improvements. The game sports a new and streamlined interface (similar to the one they used in Phantasmagoria a year later) and the cursor gets the “one-click-does-all” treatment. Personally I feel that the ‘simplified’ cursor is an improvement, but of course that’s debatable.

The graphics for this game are outstanding in a way, and mediocre in another. The entire game consists of hand-drawn graphics with a style similar to that of Disney’s animated movies of that time. It makes the world vibrant and colourful, and it works really well. There are however a few restrictions to this: the use of only 256 colours leads to a lot of dithering (which hurts the appearance), and the movement speed of the characters is extremely slow (it sometimes takes ages for Queen Valanice or Princess Rosella to walk from one end of the screen to the other). But the abundance of different animations gives both characters (as well as most of the minor characters) a lot of personality, so the style does do its job.

It’s also apparent that LucasArts’ success at the time was having some influence on the Sierra games: as far as I can recall, The Princeless Bride is the very first Sierra game that features no dead ends whatsoever. All deaths - and there are quite a few of them, as befits a King’s Quest game - also return you to just a few seconds before they occured (so you no longer need to save all the time). For me personally, this takes care of all annoyances I had with the earlier Sierra games and I consider that a vast melioration.

While the game is fully voiced, there are no subtitles in it. Luckily for the non-native English speakers, the audio (as well as the pronunciation by the voice actors) is crystal clear and the game enjoys some good (though occasionally stiff) voice acting. The music, while not overly memorable, perfectly fits the different themes that are present in the game.

Unfortunately, after a really strong first three chapters, the writing in the game falters a bit. The objectives are not as clear anymore in chapters 4 and 5, and some of the more fantastical elements are taken way too far near the end of the game (especially regarding the floating land of Etheria). The more divine and powerful characters that are present later on in the game lack the same spirit that some of the earlier characters had. And the final chapter quizzes your knowledge of the earlier King’s Quest games by having a major character from King Quest IV make an unannounced appearance here. I feel that this “cameo” could’ve used more backstory.

The more completionist players can rejoice: some of the puzzles in the game have an alternate solution, and like its predecessor in the series, The Princeless Bride has two different endings: one bad and one good. Which ending you get only depends on your final action (or inaction) in the game, though. So there are no different story paths like there were in the sixth installment of the series…

Overall, the game has a great animation style (apart from the dithering), there are plenty of improvements made in terms of gameplay, and alternating between two protagonists adds a little extra. It’s a shame that the writing stumbles a bit later on in the game, otherwise The Princeless Bride could have been on equal footing with Heir Today, Gone Tomorrow (which is by far the best game in the series)...

The game was in no means good, but it was charming. It was warm and inviting. It’s predecessors were better but they didn’t have the warmth. Maybe it was just the fact that the game was newer but I did enjoy it.