Choose the right answer and send it to me in a PM.
Only the 10th Question needs a straight answer.

The quiz is held for (almost) a day; not exactly 24 hours, is what i mean.

10. North, South, East and West are the original concept of?
Quest for Glory

Those short quizzes are very cool! I’m pretty weak on this area but I’ll give it a try anyway!
Larry Laffer married?

Those short quizzes are very cool! I’m pretty weak on this area but I’ll give it a try anyway!
Larry Laffer married?

Thanks, but shame Darki!, how could you not know enough about Larry?

I’m not a huge Sierra fan you know. I did play two Larry games, two from the King’s Quest series, I’ve tried one of the Police Quest games, but didn’t like it too much! I’ve never even try to play any Space Quest games.(I don’t like to play space themed games)

Thank you All for joining This Sierra quiz, it was an honor to have you!

results will be posted after an hour.
.
.

So far no one answered number 10 correctly, so here is a Hint :

Congrats everyone for taking the time to enjoy this Sierra (on the run) Quiz.

Subjects num#1 and num#10 were meant to be tricky (indeed), and i had some number of debates about num#1 through some of you guys PMs, IT was only answered correctly by Timovieman, while num#10 was only answered by DarkEye and Becky through the last hour of the Quiz life-time,

I wasn’t really prepared to explain them (yea num#10 aswel), so let me get to this tomorrow early with full details about why they were like this (see OP) and not like that!

Good night everybody, and thanks to you, this quiz was fun while it lasted.

Thanks for the quiz, Advie! I’ve learned a few things about Sierra world! I want a sequel(s)! Congratulations to you Timothy, for the second win in a row!

Congrats to DarkEye and TimM! And thanks Advie for a refreshing quiz. It’s good to be the caboose sometimes.

Odd, I thought it was well-known that Larry was a software salesman. Why is there debate about this? Did they retcon it in Reloaded?

I’m still puzzled about #10, but I may have just misinterpreted the entire thing. I’ll read the explanation tomorrow…

Thanks for the fun quiz, Advie!

And congrats to DarkEye for winning this one as well. You’re raising the expectations for the Autumn AG Challenge.

And congrats to DarkEye for winning this one as well. You’re raising the expectations for the Autumn AG Challenge.

Maybe, if this tournament would be just about screenshot guessing….

Maybe, if this tournament would be just about screenshot guessing….

Nah!  What fun would that be?

I’m sorry I didn’t get to respond, Advie.  My Houdini dogs escaped again, and I had to chase them around the neighborhood last night.  I looked at all of them and would have gotten 3 right without guessing.

Out of curiosity: I don’t get question 7. Rosella appears in King’s Quest III, IV, V, VI and VII. So shouldn’t that be 5 times?

Thanks for the fun quiz Advie & congrats to Darkeye & Tim!

Odd, I thought it was well-known that Larry was a software salesman. Why is there debate about this?

I haven’t played any of the games mentioned in the quiz so had to rely on doing a little research rather than blindly guessing! I came across 2 fictional biographies for Larry which both stated that Larry was a programmer (before the 1st Larry game) + there’s some info in Wikipedia where Larry is also listed as a fictional programmer.
Not having played the games myself I already said to Advie that I wasn’t going to argue about it!
Actually I’m quite pleased with my score considering I haven’t played the games but I didn’t quite get my head around no 10!

Wikipedia steered me wrong there too, Chrissie! But I also haven’t played the Larry games - maybe that’s the job the Wikipedia article mentions him getting fired from and now he’s a salesman.

Thanks for the quiz, Advie!

The locations visited within the tetralogy (Quest for Glory) were to correspond with various other symbolic cycles of four, such as the 4 classical elements, the 4 seasons, and the 4 cardinal directions:-

Somewhere between finishing Trial by Fire and cranking up the design process for Shadows of Darkness, Lori and Corey realized a fifth chapter would have to be added to bridge the games. That chapter became Wages of War….

“Wages of War (Tarna/QFG3) is the bridge and broke the rules. It was in Fricana, which is Africa. We added Wages of War to the series because the game called for it.
So we broke our own metaphor” - Lori & Corey Cole.

Num#1 :
Its a tricky question, but if anyone would want to debate and take Wiki as ‘the’ reference, must understand that Wiki is inaccurate (of this point) to be precise, they made an assumption of Larry occupation, on what Al said of the-never-released-Larry 4, where ‘hypothetically’ Larry works for Ken Williams, to makes Larry 4 instead of Al, but then he loses the flobbies.
but Larry originally was (before even traveling to lost wages at LSL1) a Traveller Software Salesman, and since this all about LSL4 is an illusion, and we can’t be sure since we never seen it

If you still need more prove, watch this Video

P.S: About Kuru’s Point up there considering Num#7 and Rosella, he is right, and i glad that didn’t make any troubles through this quiz, as i already meant, Rosella appears (in-game) at the king Quest Series..

P.S: About Kuru’s Point up there considering Num#7 and Rosella, he is right, and i glad that didn’t make any troubles through this quiz, as i already meant, Rosella appears (in-game) at the king Quest Series.. 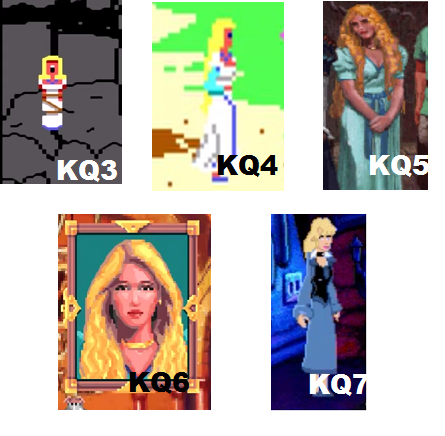