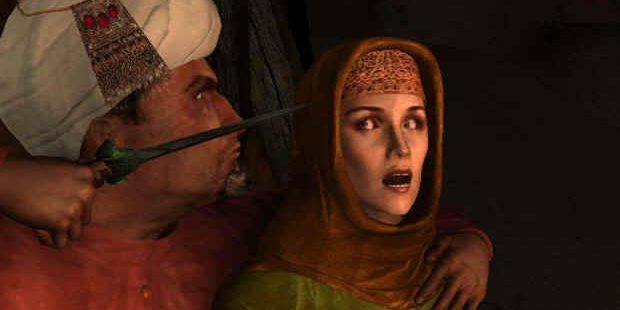 I don’t remember too much about Jerusalem: The Three Roads to the Holy Land (2002) (a.k.a. Jerusalem: The Holy City) the 3 roads referring to religions Christianity, Judaism & Islam.
Out of all the ‘educational’ Cryo games this is the only one along with Versailles 2 I have a PC version of & was the least memorable for me. I was unaware at the time of playing that it was a sequel to Pompeii (a game I couldn’t get hold of at the time!).
As with previous Cryo games the environments, culture etc are based on research & although the story is fictional you can glean more ‘historical’ facts from an encyclopaedia accessible within the game. I always enjoy a venture into re-creations of past times & wish I could remember more about this game!

Has anyone else played it & if so what did you think?

I did play Timescape: Journey to Pompeii but I don’t think this one was available for Macs, which really annoyed me at the time.  The main character, Adrian Blake, spurns the love of the goddess Ishtar because he loves Sophia.  Ishtar puts a curse on him in which he has to win the love of Sophia again and again throughout history.  As so often happens, the series fizzled after the second game.