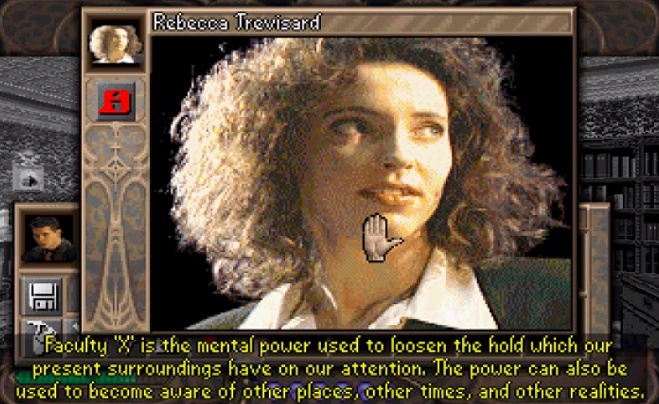 Goodness reflects the Light and Evil bears the seed of all Darkness.
These are mirrors of the Soul, the reflections of the mind.
Choose well…

Realms of the Haunting (1997) is the scariest game I’ve played. I keep telling myself I should finish it one day because it’s also a very good game, but then I remember the monsters coming up behind me that scared me to death…

If all monsters are like that on the picture, I’d be happy to play it.

I picked up the game very cheap on Ebay years ago but have never got around to playing it - sadly I probably won’t be able to now on the systems I’ve got!

It’s a DOS game, Chrissie. You can play it in DOSbox.

I didn’t know who that couple in your avatar is, so I did a Google search. An interesting choice! Can I ask why, or am I on dangerous ground here?

BTW, shame on me for not recognizing them.

that couple in your avatar… Can I ask why?

For the fun of it - I like the expressions on their faces. It’s rarely that you see a dictator with such a goofy look (Hitler excepted). He looked serious and cunning most of the time, the empress (with her trademark charming smile*) made him caught off-guard.
*and by grabbing his head and pressing his face to hers - hence the hilarious look

BTW, shame on me for not recognizing them.

Not really. The sooner they’re forgotten, the better.
At least where I come from.

Now I’m curious….who is he?

I thougt it was a picture of Marlon Brando…at least that is what it looks like, with the amount of detail available in an avatar sized picture, but I must be very far off

He was the greatest con artist of the 20th century.
Beside many other things.

Now I’m curious….who is he?

Tito - Like Karlok I did an image search, otherwise I also wouldn’t have recognized him.

Ah…heard of him ofcourse, but never knew what he looked like, so I’d never guessed