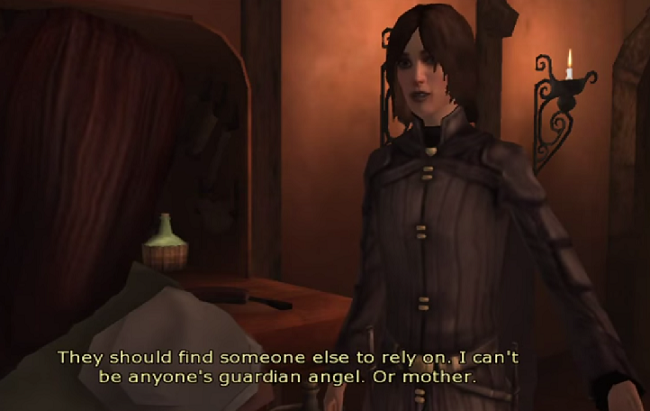 From a young, naive, insecure art student troubled by dreams to a tough, even cynic warrior with no illusions left: April Ryan. One of the best female protagonists ever. IMO.

I hope more will be revealed about her choices and destiny in Dreamfall Chapters. Haven’t played the first part, I’m waiting, more or less patiently, for all five episodes to be released.

I hope more will be revealed about her choices and destiny in Dreamfall Chapters. Haven’t played the first part, I’m waiting, more or less patiently, for all five episodes to be released.

‘Open your eyes Look around sometimes’

Attached image removed by moderator: Watch out for spoilers please.

April Ryan is indeed one of the best characters in Adventure games, but

I hope more will be revealed about her choices and destiny in Dreamfall Chapters.

Dreamfall Chapters is NOT April’s story, instead it is Zöe’s and Kian’s story. So if you play chapters expecting the above, then you will just get disappointed.

They are however also planning to make a 4th game called The Longest Journey Home, where April should once again play a larger part.

BTW: Book two of chapters will be released today, so I know what I will be doing this evening.

come on, as if any one noticed , i am just enlightening not spoiling

Well I’m not the spoiler police, but Ragner and RTG deliberately didn’t post any thing about that part in their trailers or otherwise, because they wanted it to be a surprise for the players.

you blaming me for being ahead of their surprise , Karlok asked about April fate, and i don’t know anything, this was shown in the game and i remember the Alvane’s home quite well from TLJ, so i made my connection , and above all i think Ranger would be happy to know that there are ppl who at least merely caught this insert. he didn’t put it at the end of the chapter for nothing.

Advie, you are only making it more and more spoilerish!

If you want to discuss the meaning of the scene, then there are other and better places to do that than in this thread, especially since you aren’t using spoiler tags.

i will be polite and shut up

you dont waste a chance to oppose me Karlok, where is the love, pity

you dont waste a chance to oppose me Karlok,

I simply said that I didn’t want to know anything about Dreamfall Chapters, which I thought was already obvious from my haven’t played the first part, I’m waiting, more or less patiently, for all five episodes to be released. But apparently it was not. Now I know things I I cannot unknow.

Please everybody, no spoilers in this thread.

Please everybody, no spoilers in this thread.

Advie, I’ve removed that screenshot. Please think more carefully about what you’re posting and where you’re doing it. Thanks.

you dont waste a chance to oppose me Karlok, where is the love, pity

Pardon me Advie but that really is one mis-guided post - Karlok did not oppose you & had already stated that she was waiting patiently for all 5 episodes of DF chapters to be released before she played them & DID NOT ask you about April’s fate!  Karlok was also not the 1st person to point out that your screenshots were spoilers so why are you picking on her????

you guys are taking your authority way too far .

how come two screens from previously released ags can be spoilers, ppl should be given the chance to express their knowledge, these scenes were given by devs so people would think about and come to those sort of conclusions..
i swear you didnt play Chapters or you would have known that these are no spoilers.

and why don’t you guys go also and delete posts for ppl who ruin quizzes by giving hits, why do you rebuke posters when they express their hate for telltale, why do you always close threads of the most important issues like GK-remake and Kings Quest , why you turn off a thread of someone whos promoting his game ‘Fate of Atlantis’ and calling him a spammer, why don’t even go shut my OST thread that i ‘ve been spamming all alone in one thread for two years; sharing vital infos no one cared to bring in, why don’t you admit that your site had been scammed with Tex Murphy’s fans and would go fighting forever to prove otherwise, do you feel untouchables .

He just named those three. No disrespect to Moriarty, but he probably couldn’t even name five other adventure game developers nowadays.

what do you call this, take out the ‘no disrespect’ phrase, and its all nothing but disrespect.
your badges are there to organize not to oppose or neglect .

come on Admins we are here to fight for the genre which is been carried away by companies dont give a shit about it. take our sides please and don’t oppose me for a stinky missing spoiler.