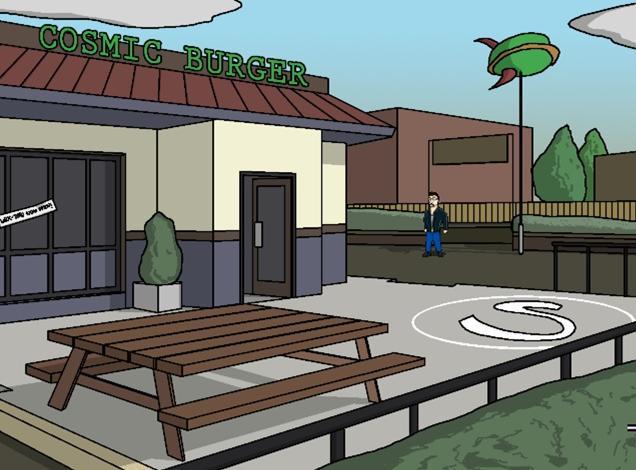 The only thing that possessed me to buy Da New Guys: Day of the Jackass (2012) at the time as the graphical style didn’t appeal & I don’t like wrestling was that it was published by Wadget Eye Games.

I’ve only just got around to playing it recently & found it to have quite an engaging if wacky story, odd characters with so-so voice-acting that grew on me, good puzzles (mainly inventory type) varying in challenge & some interesting game-play elements. I liked this game a lot more than I was expecting to!

I did not buy it for the same reasons. Now I am going to re-think that decision. Thanks!

I agree, I liked it way more than I would have expected. I remember this burger joint, and the unusual way you don’t wait in line. I was sort of hoping for a sequel—I know there’s more to Brain than meets the eye. There’s gotta be, right?

I was sort of hoping for a sequel—I know there’s more to Brain than meets the eye. There’s gotta be, right?

There is??? If there’s a sequel I want to see Defender’s face!