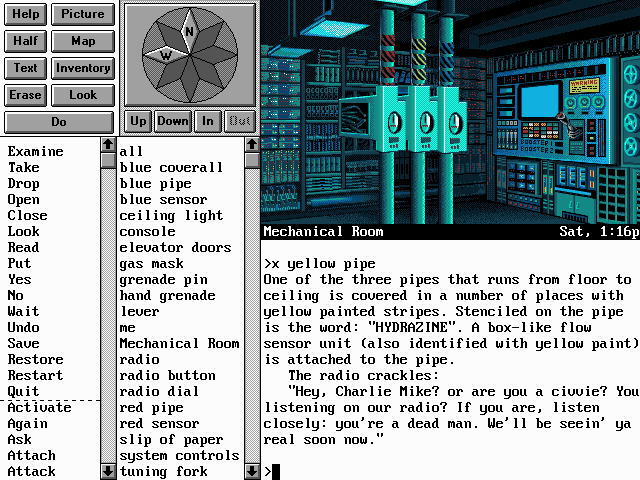 Text adventures of the month are Frederick Pohl’s Gateway (1992) and Gateway II: Homeworld (1993). Yes, Legend Entertainment again. Hey, it’s not my fault they made such excellent games!

I chose a screenshot from the sequel because it has a strong start with a long and exciting escape from Bad Guys who have already killed dozens of people with a gas attack and are out to get you as well. You took a walkie-talkie from a dead terrorist and while you make your escape you can listen to the Baddies. Or switch to the military, the Good Guys who suffered severe losses and are unable to defend civvies. You’re on your own. The Baddies use code names like Mad Hatter, Looking Glass, Cheshire Cat, March Hare. The dead terrorist was Mock Turtle and his buddies find out way too soon that he’s no longer among the living. See the screenshot. Listening to them closing in on me was scary as hell!