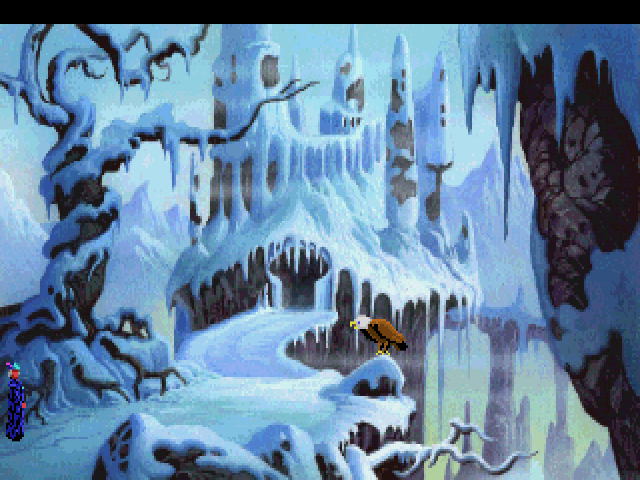 King’s Quest VI was superior to King’s Quest V in every respect except one: background art. I had the hardest time picking a pic for today, because pretty much every single screen of KQ5 would be worth framing and putting up on a wall. (That the man who made the game look so fantastic, Andy Hoyos, is now the art director on Moebius makes me giddy with excitement.)

I’m always a bit sad when I think about King’s Quest V, because it’s a game I remember falling in love with as a child, but now I’m unable to see past its (huge) flaws. It was supposed to be Sierra’s big foray into the 90s, with the fantastic VGA art and the icon-based interface, but while it looks fresh, it feels old, so very old — rotten. It pays no attention to its story, its world, its characters, putting together a hodgepodge of clashing elements just to serve the gameplay. A gameplay which revolves around punishing the players by tricking them into early deaths and dead-ends. It’s paint-by-numbers Crowther & Woods, slavishly following all the conventions they introduced in Colossal Cave — except (thank God!) the non-Euclidian mazes. Roberta Williams innovated with success in many of her games (KQ1, KQ3, The Colonel’s Bequest…), but with KQ5 she had her head firmly stuck in the 70s.

October 1990 saw the release of The Secret of Monkey Island, a game which was built around a new design philosophy set out by Ron Gilbert(*). When King’s Quest V came along a month later, despite looking better than any game before (and most since), it was already hopelessly outdated.

(*) This is the single most important piece of writing in the history of the genre. If you haven’t read it yet, do so now.

Additional material #1: You’ll note that I haven’t mentioned the CD version, because I like to pretend that it never happened. But I cannot not link to this video.

Additional material #2: Paw Dugan’s Let’s Play is to KQ5 what Mr. Plinkett’s reviews are to the Star Wars prequels: hilarious, outrageous and the most insightful piece of criticism you can find on the matter. Don’t miss it.

Fun contest of the day: Give examples showing that KQ5 breaks every single one of Gilbert’s Rules of Thumb. For extra credit, give as many examples as you can think of for each rule, especially rules 3, 5 and 9. One FREE copy of the MI1 Special Edition to win!

First time I have heard of this Ron Gilbert article. Nice one, but I don’t agree with some of his rules. For instance, not knowing what you’re supposed to do is one of the aspects that make Mystian games interesting.

I’d like to respond to your challenge, but my playthrough of KQ5 is surrounded by a thick fog. I know Cedric must have been there… I probably repressed the memory of his awful presence. The part I remember best is the yucky ending at the castle.

I always see KQ5 more beautiful and intriguing the KQ6, i tried to play both lately after i read many comments about that part 6 is the best of the series but that didn’t change my opinion, i guess/thought that Jane publicity or lets be fair and say touches in part 6 took KQs into more a cozy output, nicer story, easier Puzzles

Thanks Kuru for always giving scenes of our Beloved R.W ... you had covered 5 parts until now, but i am not sure you will go until the 8th

*Opens the thread and sees KQ5*

I haven’t played KQ5 in probably 16-17 years. I remember enjoying the game, but it was difficult. I played it with a friend and went to his house every day for a week or two. We used a walkthrough often. Hehe.

*Opens the thread and sees KQ5*

I don’t understand the hate either. Lots of deaths don’t make a bad game at all. It makes it exciting. Occasionally frustrating, but exciting. And it feels a hell of a lot more like an adventure than KQ6 does.

Postscript: Gilbert’s ‘rules’ can go fall off a cliff. Or get bitten by a snake. Or die of thirst in the desert. Many options.

The playthrough Kuru posted is hilarious. This part made me LOL, just his reaction when he accidentally figures something out.

Actually, the Secret of Monkey Island thing is interesting because you could say Monkey Island influenced the adventure genre in the same way Heavy Rain did in that it watered down the mechanics of the genre in order to broaden its appeal to the peon-err… novice gamers of the day.

Although, some things had to change.

That’s why I appreciate Daedalic - I’m finding their games to be sort of a modern equivalent to Sierra and LucasArts.

Although, I think it’s a wrong notion which is often heard that “Sierra and Roberta were cruel” - it was more of a trend. The purpose of the game was to give player a hard time in getting through the adventure, thus giving players more satisfaction once he’s done.

That’s why I appreciate Daedalic - I’m finding their games to be sort of a modern equivalent to Sierra and LucasArts.

Deponia took me much longer than two evenings and I needed help twice.

Sierra, on the other hand, produced lots of games I found easy.

That’s why I said “modern” - compared to some games, at least they have puzzles.

Did you play The Whispered World or Edna & Harvey? I believe you wouldn’t finish it in two days without a walkthrough. It is possible that, however, even Daedalic went on the easier side with more recent Deponia & The Dark Eye.

Did you play The Whispered World or Edna & Harvey?

Only the former. And only using a walkthrough quite a few times. That’s why I found the ease of Deponia odd.

Maybe some people consider Sierra hard because we were younger (and dumber) when we played them? Don’t even ask me how long I spent in KQV wandering around the first part not having a clue what to do.

Maybe some people consider Sierra hard because we were younger (and dumber) when we played them?

I don’t think it has anything to do with the age of players - more with the trends. People were “amused” to be stuck, it was fun looking for solution for days, calling Hint Line… I’m not saying I’d go back to those times - I love having Internet walkthrough at a click away, it just needs a lot more of self-control in order to enjoy games today as they were meant to be enjoyed when they first came out. And not only puzzles, but also the game design is crucial for a difficulty -  like, I’m sure hesitating to use hot-spot revealer will give you much harder and longer experience with games today. Not to mention the “innovative” usage of different colors to match the possible actions you can perform.

Don’t even ask me how long I spent in KQV wandering around the first part not having a clue what to do.

If you ask me, the hardest adventure game I’ve ever played is “Conquest of the Longbow”. Why? Puzzles are not that hard, inventory objects are few… but you could spend hours in that forest and not advancing an inch in the game.

And that’s why I believe Sierra games were hard more because of a “design”, rather than puzzles, even though I’m not saying there’s anything wrong with puzzles in those games. I believe the main reason why we think of LucasArts games as “easier” is because they had hot-spots. That simple, but it makes a huge difference in gameplay experience.

KQ5 was the first game I bought and it got me glued to the computerscreen for 2 weeks at least. I loved everything about it, especially the sense of adventure. The fact that you could die just added to the reward when I found a way around it. This game made me the adventure aficionado that I am.

There have been other games that gave me the same experience (beast within, pandora directive, Broken Sword 1) but not many. Of course it helped that it was my first adventure and it was the silent version but still.
After that I found KQ6 a tedious affair and I needed a hintbook to finish that one.

I played this for the first time a few months ago.

In the archived forums was a short review that I wrote. It went like this:

This was typical Sierra brutality. Hundreds of deaths and dead ends had me restoring previous saves more often than in all the games I’ve played these last 5 years combined. And I was using a walkthrough to avoid the dead ends!

The story is decent, graphics were actually quite good (especially given its time period) and the voice-over (with our very own Josho as the lead) was pretty good. Cedric the Owl was slightly annoying after a while, and I didn’t like the fact that it was either voice-over or text, not both at the same time. Fortunately pronunciation and sound quality was good enough for everything to be clear.

It’s really not a bad game, but I’ve never liked the abundance of deaths and dead ends in Sierra’s games. It’s just too unforgiving…