Time Dreamer by Tiki’s Lab is a surreal time travel game graced by a warped sense of humor. You assume the role of a young man who wakes up after being in a coma for seven years. A lot can happen in seven years, and you find that, while you’ve been unconscious, the medical establishment has become rather negligent toward its patients. As soon as you can sit up, the nurse boots you out of the hospital. 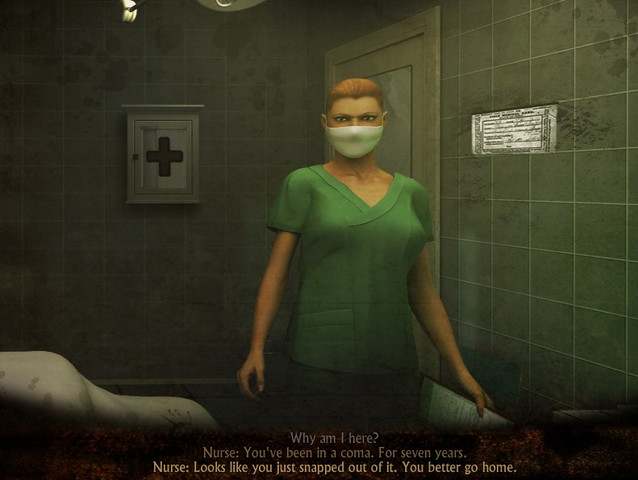 Stumbling down the hospital corridors and streets of Gloomville, you reach your house only to find that it has fallen into disrepair. It doesn’t look as though your father (or anyone else) has lived here for years. 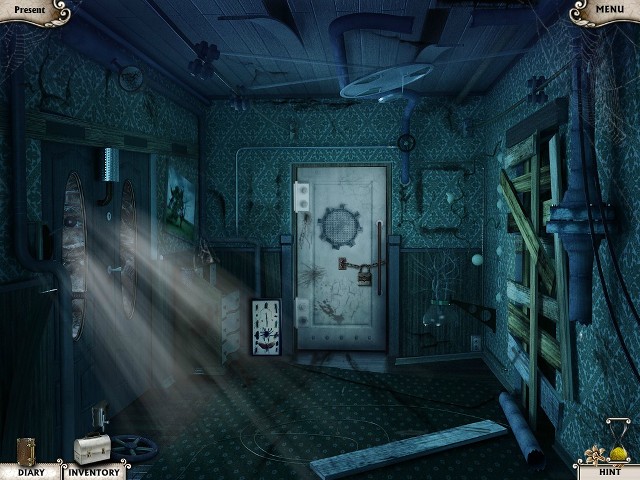 What has happened to your father, Eric Brown—a scientist who worked for INFAM Corporation? As you start to comprehend the disastrous changes that have occurred while you were in that coma, you are interrupted by a visitor named Giovanni. 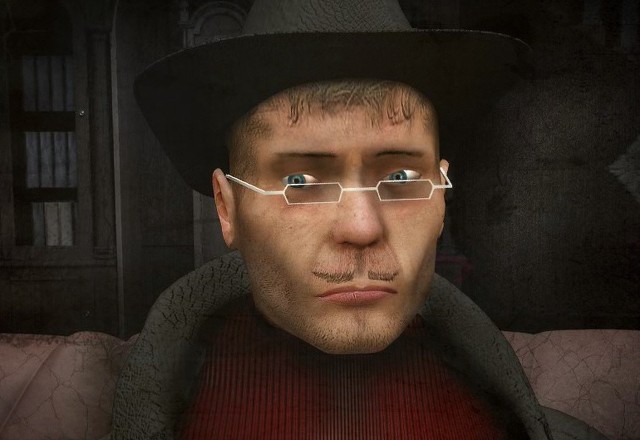 Giovanni claims that he was your father’s friend and co-worker.  He has some startling news for you, and an unusual quest for you to consider.

CAN YOU TRUST GIOVANNI, OR, FOR THAT MATTER, ANY MAN WITH A PENCIL-THIN MOUSTACHE?

We’ll now begin Time Dreamer. For this section, start at the beginning and play through Chapters One and Two. Stop when you reach Chapter Three, which opens in the offices of the INFAM Corporation in the year 2022.

If possible, finish this section before Wednesday, January 7th, 2015, when the second section will start.

1. If you don’t already own the game, you can purchase it from Big Fish Games. This game does not have a Collector’s Edition (CE) version.

2. Reading the diary will help you keep up with the story throughout the various time periods. Occasionally the diary can be a bit spoilerish, though, so be warned.

3. If you are not terribly fond of Hidden Object screens, I recommend selecting the easiest level of gameplay when you start the game. The HO challenges in this game are difficult and the cursor punishes random clicking by momentarily going haywire.  On the “Casual” level, you can mouse over the listed items and see a silhouette, which makes the HO challenges go much faster. BTW – as this might affect your decision, you should be aware that “Casual” mode also makes the puzzles easier.

4. Except during cut scenes, there’s a sign in the upper left hand corner of the screen that tells you whether you are currently playing in the Past, Present, or Future.

Do we have a “complete by” date on the first section.

Hopefully time will catch this soon and pin it.

Do we have a “complete by” date on the first section.

Yes, as noted above:

“If possible, finish this section before Wednesday, January 7th, 2015, when the second section will start.”

I’ll give it a separate paragraph to make it more obvious.

This seemed like a quirky game. If there’s an Epiphany sale or something tomorrow I might grab it, but most likely will pass if I’d need to buy this full price. Trying to also participate in TWW playthrough.

That was exactly what I was thinking. He’s been in a coma for seven months. He probably can’t stand up, let alone walk without help. And the nurse is sending him home.

I had to laugh when I picked up the newspaper: OMG Daily News! The rope ladder is funny too.

I like the humor but those HO scenes are murder. My mouse is having some problems with them also; sometimes I have to click several times before it will acknowledge the choice.

That was exactly what I was thinking. He’s been in a coma for seven months. He probably can’t stand up, let alone walk without help. And the nurse is sending him home.

That’s the WTF?-moment I mentioned in the voting thread: you wake from a 7-year coma and you’re basically told “you’re awake now, go home”.

Does anyone know how I can play this full screen without it stretching to a widescreen resolution? I don’t mind black bars on the side, I do mind playing windowed and/or in a lower resolution.

The music is also very quiet. I set it to 100% and the effects to 50% in the options, just to make both relatively equal…

The rope ladder is funny too.

I’ve been studying the rope ladder, which combines the horizontal strengths of a hanger, a plunger, a chain, a rolling pin, and (possibly) a spade. Why not use the baseball bat? Too obvious?

The music is also very quiet. I set it to 100% and the effects to 50% in the options, just to make both relatively equal…

I had to set the music to max volume as well. Weird. I don’t remember this being an issue when I played the game a couple of years ago.

An intriguing thought. That could explain some of the other mysteries that have yet to surface at this point.

I would have to replay the opening sequence to see whether there was a clock in the room when he meets the nurse. If there is, your concept is plausible. Although trying to merge that with the newspaper article re: coma, makes you wonder.

Finished with Chapter 2. I thought I remembered this game. But it turns out I’ve forgotten quite a bit since the last time I played it.

I’ve just finished Chapter 2 too. Although it was in my Purchase History I just don’t remember playing it at all so it’s possible I played the Demo, bought the rest of the game & never got around to playing the rest of it!!

I don’t remember there being a clock in the hospital but my 1st thought was what happened to cause a 7 year coma? Yes, it was a bit strange that the protagonist on waking up was sent home!

The HO screens were okay but objects were too small & some of them difficult to find without using the hint button which didn’t recharge fast enough for my liking!

The stranger was very aware of the protagonist’s abilities while sleeping with a clock in the room so I’m wondering what he’s up to? I confess to skipping the lock-pick puzzle as I just don’t like them but apart from that I’m enjoying the game so far & am very intrigued to see what happens next!

BTW, I skipped the lock pick puzzle as well. I found the directions to be very uninformative. I also think this is a random puzzle because if I backed out after five minutes of frustration the puzzle reset to a different sequence.

I hope I’m not offending anyone if I say that I’m less than impressed so far.

The lack of voice acting caught me off-guard, but that’s something I can live with.
The graphics are hit-and-miss with the environments looking great but anyone or anything moving through them looking shoddy at best. That owl looks outright weird, and the faces are just… off. Especially the hair on your dad’s head in that photo. It’s just wrong...

The story itself hasn’t yet pulled me in, so that’s not helping either. It’s just hanging oddly together at the moment, which hopefully will improve once we get a bit further in.
Right now it feels like they just want to get things moving along quickly without elaborating on anything. Why were we in a coma? Why were we sent home immediately? Why can we time-travel when dreaming? Who is this Giovanni who so conveniently knows about our powers, and why are we immediately jumping at his request to break into Infam? And why does that firm have so little security measures?

I feel the story could have benefitted from a flashback sequence with your dad, so the game could establish your bond with him, and maybe make you actually care about any of the characters in the game.

As it stands right now, I’m really hoping for things to improve quickly…

I hope I’m not offending anyone if I say that I’m less than impressed so far.

Not at all.
I’m remembering why I uninstalled it after playing.
I don’t remember the story at all.

I solved the lock pick “puzzle” almost by accident—just kept clicking on it.
Apparently all you need to do is click around the edges of the circular part. When you click the right spot, something in the lock springs open. There are three of these things that spring open, so you start clicking around the edges all over again to spring the next one. As a clue, as you start clicking closer to the right spot, the sound of the click changes a little. Some of the scratches on the lock may have been clues—as if someone had picked it before.

Who is this Giovanni who so conveniently knows about our powers, and why are we immediately jumping at his request to break into Infam?

Yes, your character is such a sucker. He should have suspected something when Giovanni suggested breaking into Infam to make sure Giovanni got to be head of the company. Makes you wonder if Giovanni had something to do with your character being comatose—in order to confuse him enough that he could use his power later.

Chrissie—if you’re playing in Casual mode, you can mouse over the words on the HO list and it’ll show you a silhouette. It’s much easier to find the objects that way because not only is the shape the same, but the orientation of the object is the same as on the screen.

Tim—I suspect that your Dad is supposed to resemble Albert Einstein having a very bad hair day.