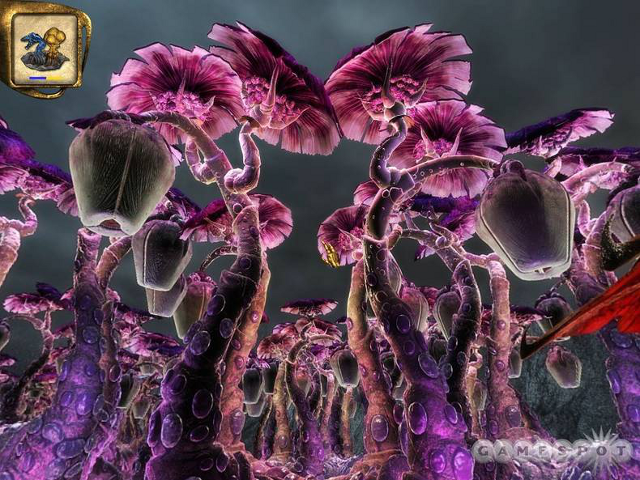 Voyage was probably not Kheops’s most fun game, but I liked the idea that the Moon could be covered by this crazy vegetation. Much more interesting than the boring old rock it actually is.

I liked Voyage very much. All that lush vegetation looked even better in a dreary winter of 2006 when I played it. Nice puzzles and you have to learn a foreign language to boot!

I love the beautiful screenshot!
It wasn’t one of my favourite games from Kheops but on persisting with it I did go onto enjoy quite a lot of it. I wasn’t too impressed with the timed jumping part of it to start with but I liked the weird wackiness of it & some of the puzzles were interesting!

Fantastic game. I think of this as Kheops gameplay masterpiece(ahead of the more celebrated Mysterious Island) and Path of the Dragon as being their storytelling masterpiece. Definately the two finest Kheops games.

I really enjoyed Voyage. It did have many flaws - the timed beginning, the fact that it didn’t have much of a plot (nor a direction until the second half of the game), some truly annoying puzzles, and more.

But it had a certain charm. A lot of the puzzles were fun, the lack of direction actually contributed to the feeling of being on a strange new world and not knowing how you will get back home, the few characters you meet were nice. It is also one of the Kheops games with a decent ending (sort of).

It also had that little extra something that adds to the world in the items in the shop. Most are unneeded to finish the game, but they give you information and history about the setting.

I’ll echo that the game had a very charming quality… some of the Selenites were kind of cute!

I liked creating the different plant hybrids to progress in the game (xenobotany!), and I liked how there were different ways to solve the same puzzle/problem à la Return to Mysterious Island. And who knew there were so many ways to die in this game? I kept killing Michel just to see the different game-over screens!

Purple seems to be a popular motif with these Adventure Game Scene of the Day screencaps.

I wonder if there is some interface design colour theory going on here… like purple being a color that will alert the player without being too harsh on the eyes.

Purple seems to be a popular motif

This guy started it all: