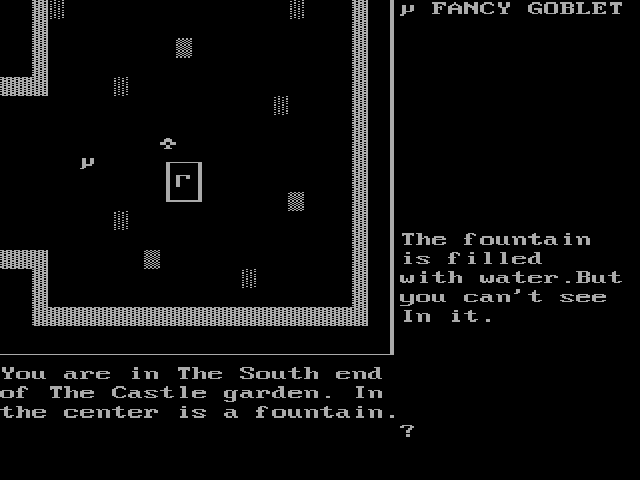 Does anyone remember Castle Adventure? It was a nice short freeware game from the 80s in which you had to solve puzzles and deal with monsters to escape the titular castle, collecting 13 treasures along the way. As you can see, it used ASCII art for its graphics (the weird symbol that looks like the clubs card suit is your character).

I first played it 15 or 20 years ago, but was unable to complete it because of a bug with the savegames which made the game behave erratically (monsters appearing where they shouldn’t, puzzles getting wonky) whenever you restored a save. Yesterday, I downloaded the game again to get a screenshot and tried to beat it this time, but I hit the same bug again. However, after hours of strenuous research *cough… wikipedia… cough* I found out that someone made a remake, which doesn’t have the bug (it has a few minor bugs of its own, but nothing game breaking) and adds a point & click interface and some colours.

And so yesterday, after over 15 years, I was able to finish Castle Adventure — and with full points! 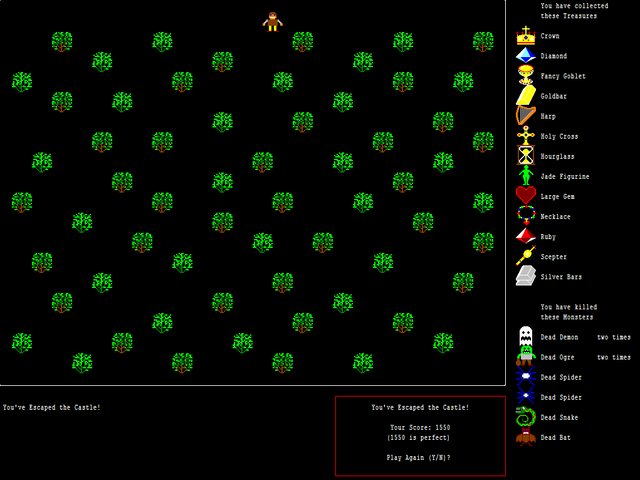 Does anyone remember this game? Has it ever happened to suddenly remember about an old game you’d almost forgotten and to get back to it many years after first playing it?

Thanks God for Sierra

According to Wikipedia, “It was also illegally included in Keypunch’s Swords and Sorcery under the title Golden Wombat.”

I have no idea what you are talking about.

Haven’t played this but I used to absolutely adore the old ASCII games like ZZT and Kroz. Amazing what you can do with just a set of symbols.