Gibbous - A Cthulhu Adventure - Out on Steam and GOG

any news about the release date, or the Demo, Underhill?

Happy to say everything in the demo other than secondary character voices is up and running - graphics, animation, music, interactable objects, etc. We’re now in the process of introducing conditions (can’t pick up X until talked abou y, stuff like that) - this should take about a week or so. What’s left then is getting the rest of the voices and testing it to make sure there are no progress-breaking bugs aaaand that should be it.

So I know I’ve said it would be earlier before, but we want to make sure it’s as bug-free and polished as possible.

Until then, you can check out what the main menu looks like by clicking below: 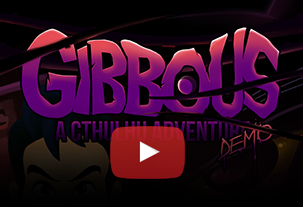 that s something to look forward to, loved that kitty

So guys, after saying “I think it’s done!” a few times and being proven wrong and going back to it etc, I think the demo’s really done this time. We’re in the process of testing it, but since we have no dedicated testing team it will probably take a while.

Having to do contract work on the side doesn’t help, either (actually it’s been “doing Gibbous on the side, sigh), but the good news is that we’re pretty confident March or April will be Kickstarter time for us. Woohoo!

We’ve been pretty reluctant to giving out the demo so far, but I’m pretty sure I want adventure fans to get a chance to play it well before we launch, looking forward to sharing it with you guys.

Ok that’s it, time for me to go back and go through this dialog tree the 42nd time this week

Hey guys! Here’s a process gif for one of the rooms, namely the Miskatonic Library interior

I know I’ve been crying wolf for a while now, but the demo really IS coming in a couple of weeks. Honest!

Yep! Can’t absolutely confirm it because we can’t do a KS from where we live so we have to pull some favors, but the plan is to have it in the first week of April, so help us Yog Sothoth.

I will definitely back Gibbous on kickstarter. Good luck!

As we draw nearer to the campaign, thought I’d share another work in progress.

This is the stinky harbor of Fishmouth, here in an early stage.

Great news! Kickstarter is just a couple of weeks away.

In the meantime, check out our official website, live now:

(I have no idea if video embedding is at all possible, please just pretend I did that

Thanks for having patience with this project!

Awesome teaser!
“From the mind of some dude you haven’t heard of yet” is wrong - everybody knows Mr. Underhill

Will back for sure.

Thanks Wilco! We’re both excited about and terrified of Kickstarting, so we’re gonna need all the help we can get. I appreciate it!

I will also probably post the draft campaign page when it’s done so I can get feedback from you guys, we’re still putting the finishing touches on the video pitch, page graphics, etc.

Exciting! Also, that parallax scrolling on your website looks amazing…!

Looking good, and I loved the jokes!
My favorite was the in-game dialogue about bothering everyone.