Check Joe Keeley previous reviews and you will understand how stingy he is with his rating; 3 stars could easily had gone four with someone else. i am sorry, but that is true.

Your post made me curious so I did what you suggested. In his 10 previous scored reviews, Joe Keeley gave out 4 four-star reviews and only 2 three-star reviews (not counting Gibbous). The rest are 3.5 stars.

To be fair, I don’t really see how that constitutes a “stingy” track record.

All of them could have easily went at least half a star up.

cheers, but our site had given the lowest rating all over the net, you might wanna check this too, or not.

I wasn’t really looking to get into a debate about review scores in general. But I can think of a dozen counter-points to your argument that such and such scores “could have easily been” this or that. But I think the best answer to that is “of course, so what?”

Unless you can point to actual flaws to the review that can be discussed, saying such general things about subjective opinions and critiques is futile.

More broadly, if you check out this link on Metacritic (https://www.metacritic.com/publication/adventure-gamers), it says that Adventure Gamers scores games on average 7.6 points lower than all other publications—giving out an average score of 6.6/10.

The fact is, it’s easy to point to a reviewer, or indeed an entire publication, and say they are too stingy or too generous. There could be many legitimate reasons for that (in this case the game genre is probably the biggest contributor).

But at this point, you’re not talking about Gibbous, which is the topic at hand. To me, the game looks great, and I’d love to play it. Keeley’s review is a well-written piece. His, and AG’s review record, is a different topic.

I wish i can discuss the review in a more practical way, but i cant, at least now.

To be honest (in general) the site is always generous with it’s review ratings (at least for a while now) but i wasn’t talking generally about AGers. to be clear.

Beat this the other day and loved it. Thought the writing was universally witty, and agree with an earlier post that the lines mentioned in AG’s review are fun exaggerations of noir detective speech.

It does help to be familiar with HP Lovecraft, though. Much easier to follow the various cults and lore, and get references like Kerwan/Corvinus, which is from the “Case of Charles Dexter Ward.” Hope they can make a sequel exploring that and other unanswered questions.

My only complaints are that initially I couldn’t stand Buzz’s voice. But he did grown on me by the end. And that sometimes the game showed its budget in the cutscenes, or lack thereof. There are moments where it just fades to the next scene, and not having some sort of animation there is really jarring. Example, when Peace ties up Buzz in the Castle.

But really great game overall. Took me 12 hours to complete, which is a good length, and the puzzles got pretty clever in the later half. Loved the “moment to moment humor, darker arching plot” that actually delved pretty deeply into Lovecraft mythology.

There’s a lovely mini-review of Gibbous at Polygon that John Walker somehow managed to smuggle out of his RPS prison cell.

The game is very high on my next-to-play list

There’s a lovely mini-reviewJohn Walker somehow managed to smuggle out of his RPS prison cell.

.. even if its a mini review he obviously praising it; “good enough that I think it could have stood its ground in that [golden Era] era, and it’s a pleasure to have it today.” Said the cantankerous one.

I agree with the review that one of the protagonists has grating voice acting, but I think it’s Ketype. (Also has - a grating name)

Ketype. (Also has - a grating name)

But that’s the joke there, isn’t it.
Break the name down into two parts. Take out the middle initial and you have Donkey Type and, for the second, remove the Forename (Don) and you get Archetype both of which are jokes about the character, both within the game and private detectives in general in all forms of literature.

I would think most people get the namejoke. Another question is if it’s a fun one. I think not, but humor is of course a personal thing. I think the voice of Ketype was great though. After the intro and the first few moments controlling him I thought I was about to play a five star game. The game and especially its attempts at humor didn’t work nearly as well when controlling the other character (forgot his name).

For me the voice of Ketype had more than a hint of Clint Eastwood about it which I found very amusing.

But that’s the joke there, isn’t it.
Break the name down into two parts. Take out the middle initial and you have Donkey Type and, for the second, remove the Forename (Don) and you get Archetype both of which are jokes about the character, both within the game and private detectives in general in all forms of literature.

It’s groan-inducing as it is if the name was attached to a minor character. But to a main character? It’s just too much.

Same with his voice.

I guess we’ll never agree, but Ketype voice is the second best in the game after Kitteh, of course.

I guess we’ll never agree, but Ketype voice is the second best in the game after Kitteh, of course.

I am replaying using Arabic subtitles and its for my knowledge the first game Ever i play with it, and to my surprise its so accurate , i doubt it was made by anything but professionals translators, may i ask who had done this Arabic part?

Hey y’all, just a quick heads up: Gibbous is now 20% off on both Steam and GOG.
Happy holidays!

We are super humbled and honored to walk away with 7 Aggies, 6 of which are Readers’ Choices. Thank you so much for sticking with us from day 1! 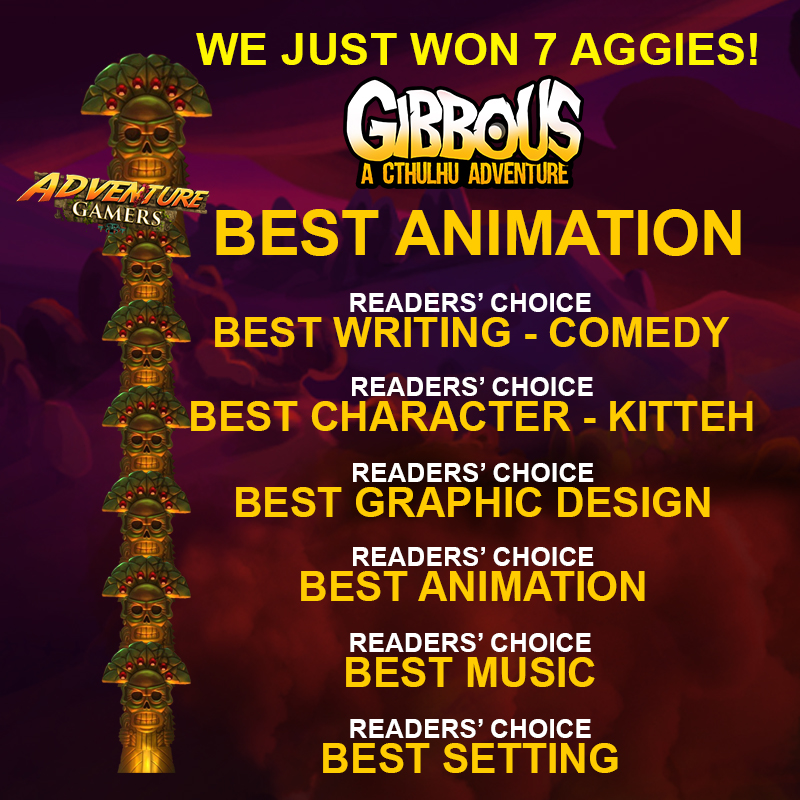